Is Di Luca trying too hard, too soon? 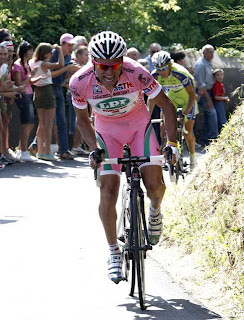 The best form of defence is often to attack and Danilo Di Luca showed he is not scared of any of his rivals in the Giro d'Italia during today's stage 10.

The three-week race has still to reach the half way point and the decisive 60.6km time trial in the Cinque Terre, but Di Luca threw caution to the wind and attacked on the descent of the late Pra Martino climb.

Franco Pellizotti (Liquigas), Carlos Sastre (Cervelo) and Denis Menchov (Rabobank) joined him but then he powered away again on the short climb near the Pinerolo cemetery to win alone in the pink jersey and take the 20-second stage winner's time bonus.

Menchov is now second at 1-20, Rogers is third at 1-33, Leipheimer is fourth at 1-40 and Basso is fifth at 2-03. Thomas Lovkvist (Columbia) lost 1-39 and slipped to eighth overall. With a far more solid lead, Di Luca is hoping he can keep the maglia Rosa even after Thursday's time trial.

“The gaps are more important now. This morning I had 13 seconds, now it's more than a minute. We'll see if I can keep the pink jersey after the time trial,” Di Luca said, confident as ever.

He quickly refuted the idea that he is going too deep, too often and too early in the Giro.

“The other guys could be a threat later and emerge later but I don't think they've been holding back either. They gave everything at Alpe di Suisi just like I did,” he said.

“I'm as strong as in 2007 but this year I'm two years older. That doesn't mean I feel older but that I'm wiser. I've two more years of experience. Things are going well so far. I'm not worried about fading because all of my rivals could fade too. There isn't a final week in the Dolomites and climbs like the Zoncolan climb. This year the Giro is different and it's an important factor.”

“Today was different because there wasn't a decisive climb. We were all together on the big climbs; it was the descent that made the difference. I raced it like a classic.”

Di Luca predicted that Wednesday's stage to Arenzano will end in a sprint or be decided by breakaway as the overall contenders save their energy for Thursday's time trial.

“I think the time trial will be a good fight between Leipheimer, Lovkvist, Rogers and Menchov,” he predicted.

“And let's not forget Armstrong. He pulled for most of the first climb today and it was the toughest of the stages. He's looking better and better.”

“I'm hoping to defend the pink jersey because the time trial isn't for specialists. If it were a flat 50km time trial, I'd lose five minutes. Hopefully it will be a lot less on Thursday.”
Posted by Recovox at 8:36 PM