Sastre dominates on mountain of truth 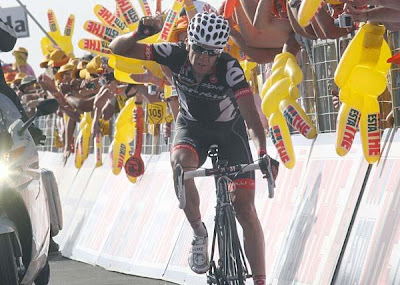 Carlos Sastre (Cervélo) proved today that he is not only prepared for the Tour de France but also remains in contention to win the Giro d'Italia. The Spaniard took the stage victory on the Monte Petrano mountain, the final climb of the day and a mountain of truth for all Giro contenders. Under a crushing heat, Sastre launched a decisive attack and distanced Denis Menchov (Rabobank) and Danilo Di Luca (LPR) in that order.

Overtaking Ivan Basso (Liquigas), an earlier attacker who finished fourth, Sastre moved up to third position in the general classification, closing in on Di Luca and Menchov who maintained his maglia rosa.

Levi Leipheimer (Astana) cracked during the final kilometres, losing 2:51 minutes and his third placing on GC. The American, after being towed up to the line by teammate Lance Armstrong, is now sixth at 3:21 behind Menchov.

Yaroslav Popovych (Astana) and Damiano Cunego (Lampre - N.G.C.) were the driving forces of the day's breakaway. The Ukrainian attacked on the descent of the penultimate climb and seemed to be out for the stage win for a long time until the race was on for the overall contenders chasing him from behind. Cunego was also off the front, behind Popyvich, but got caught first as Sastre and company hit the gas.