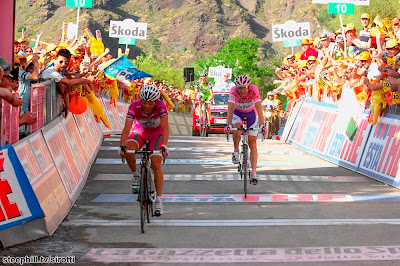 Just as Mount Vesuvius buried Pompeii so too did Vesuvious bury the chances of Danilo Diluca to win the Giro. Although Diluca picked up 8 seconds in time bonuses for finishing third on the stage to Vesuvious, the most spectacular ride of the day belonged to Denis Menchov.

Bike racing is a chess game fought by mountain climbing boxers on two wheels. The closing the stage of this year’s Giro is a 9 mile individual time trial which is a discipline that Menchov excels at. The time trial has never been Diluca’s specialty and so in the chess game of this year’s Giro it was Diluca that needed to take more then 45 seconds out of Menchov in order to have a chance to win the Giro this year. Every time Diluca attacked, Menchov was instantaneously able to respond. That was the battle of the race. The final climb to Mount Vesuvius was as thrilling as bike racing ever gets. There were scintillating attacks by the Giro’s best climbers. Nearly all the heads of state tried to attack at one point or another. The first serious attack was made by Ivan Basso. Carlos Sastre counter-attacked and provided us with a spectacular full blown brawl with Ivan Basso. Sastre’s acceleration proved to be a little too much for Basso and Sastre soloed to a great stage win. As Basso faded, Pellizotti, Garzelli, Simoni, and David Arroyo all took turns attacking the lead group of Menchov and Diluca. Lance Armstrong rode a very impressive stage and continued to claw his way back to the leaders each time there was a major acceleration.

Diluca who seemed to be in serious trouble at the beginning of the climb waited until the final two or three kilometers before his attacks were launched against Menchov. Diluca’s attacking swept up every body except Sastre and Pellizotti, but the one thing Diluca needed to do, drop Menchov, proved to be impossible. Diluca’s chances have faded as each kilometer towards the finish in Rome is covered but he will not go down without a fight. Menchov has ridden a perfect Giro so far and will now steal himself for the time trial on Sunday.

The Giro is a curious event sometimes and has been full of intrigue and questionable governance in the past. Some of the former winners that were not Italians have regularly reported nefarious incidences of nationalistic favoritism. In the modern era of cycling with much more intensive media coverage and scrutiny have prevented a lot of diabolical tactics but if your Denis Menchov it is impossible for these legends not to haunt your waking hours and probably your sleep also. With two days to go in the Giro believe me about anything can happen. Lets hope however that is the legs that tell the story and no stripe of misadventure enters into the equation. Strange things happen the last weekend of the Giro. It has however been an exceptionally thrilling edition so far. Buona Fortuna Tutti.
Posted by Recovox at 3:40 PM