I'm wearing pink on behalf of the team, says Cavendish 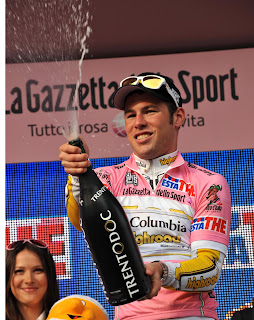 Mark Cavendish crossed the line first at the end of the Giro d'Italia team time trial, became the first British rider to ever to pull on the maglia rosa and posed with fashion designers Dolce and Gabbana. But in the press conference, he made sure everyone knew it was a team victory.

“There's only one pink jersey and it's has to go on someone's back. The team let me cross the line first because I live in Italy and it's special for me. That's a great thing,” he said.

“I'm wearing the jersey for the whole team. It's a team time trial and it just happened that someone had to cross the line first. If there were nine maglia rosa we could all wear them but there's only one, so I'll wear it for whole team tomorrow. If I win tomorrow, then I can enjoy the gratification of being the first British wearer.”

“I'm just so proud about how everything went. When we did our first team time trial training, it was rebuilding a vespa engine. We took it apart, cleaned it and it started first time. We did an effort on Thursday and everything worked perfect and I got the same proud warm feeling when everything goes right.”

“I was nervous and worried about every team in the race. Astana were one of the favourites and were last, so I had to wait for them to finish. I watched the race on television near the finish line. I had doping control and couldn't go to the toilet, so it was pretty hard not to wee for two and half hours.

Cavendish will be able to really saviour his first pink jersey on Sunday on the road to Trieste but hopes to keep it for a few days, perhaps even winning in pink in Trieste on Sunday.

“Hopefully the next two days will be bunch sprints and will suit me and the team, so hopefully we'll try and keep the pink jersey for as long as we can. The pressure will be on because we've got the maglia rosa but we'll be trying for more, perhaps starting tomorrow. I've no plans to stop this year and so if that means going to the finish in Rome, I'll go to Rome.”

With the pink jersey on his back, he could afford to admit he had perhaps gone over the top but was happy to have beaten Garmin.

“For sure, we won. It doesn't matter who is second as long as we win. Then we're happy,” he said.

“I want to take this opportunity to say that I went a bit far the other day with what I said. It wasn't directed at the riders but just at the comments by the directeur. I was perhaps wrong to take it out on the riders, but I only said what a lot of people said.”

CAVENDISH THANKS PINOTTI
Some Italian journalists suggested that Italian team mate Marco Pinotti had wanted to cross the line first and so take the pink jersey, with perhaps Cavendish taking it from home on the Sunday.

He refuted their was a problem with Pinotti, saying that the team decided he would cross the line first.

Cavendish angrily shouted at Pinotti just after crossing the line because he had lead through the last corner a little too slow for Cav's liking. He was big enough to admit he had over reacted and ended any polemic by thanking Pinotti for letting him finish first and pull on the pink jersey.

“I think I'm quite well known for erupting just after crossing the finish line but when I calmed down I realised I'd been a dickhead,” he said with a smile.

“You can have ideas and dreams coming but in the team meeting one rider has to cross the line first. Marco (Pinotti) and Morris (Possoni) are Italian and winning the maglia rosa would be one of the biggest things of their career and to accept that I could cross the line first takes great respect and sacrifice and they did that for me. I have to thank them for letting me wear it.”
Posted by Recovox at 11:23 AM