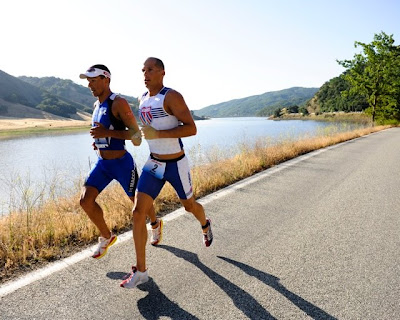 Every time I get to race against the Worlds best I learn so much and improve my game. I put myself in this situation as much as possible because that is the only way I will improve and beat them. I look forward to the many more times I will compete against the best this year as I prepare for the Ironman World Championship in October.

Since Wildflower Triathlon I have been focusing on my next 2 big races, Ironman Hawaii 70.3 and Ironman Boise 70.3. Everything is leading up to these events, which will be the end of the first half of my season. Training has been going well and I am excited for the next couple weeks. This last weekend, as part of my lead up, I raced the UVAS Triathlon and got to compete against 2007 Ironman World Champion Chris “Macca” McCormack. Macca is one of the best triathletes in any distance and any chance I can get to race him will help my performance increase. Each time I compete against him I learn more and fine tune my abilities. This race was an example of that.

The swim was lead out by Brian Lavelle, who is an exceptional swimmer. To get a solid swim like that in and hang with him and Macca is a good test and affirmation of my swim. Things are on track, and I came out of the fast swim just a couple seconds behind them.

Heading out on the bike I was right where I wanted to be. By mile 2 I was right behind Brian and Macca and working my way past them. Once I moved past Brian I waited for the right moment to pass Macca so that I could gap him and hopefully separate myself. As we headed up a slight roller I made my move and didn’t look back. I put in a solid effort and held a strong tempo for the next couple miles. As I hit a very sharp right hand turn at mile 7 I heard a screech and yelp from Macca as he was taking the corner a little to hot trying to stay in contact with me. I put in another surge and I could not shake Macca as he was not willing to let me get away. I slowed to see if he would take the lead and he would not. I knew that the ride was going to be my effort and he was going to just be content with pacing off me. I kept a good tempo throughout the ride to make sure I got the most out of it and to possibly tire Macca out a little for the run. 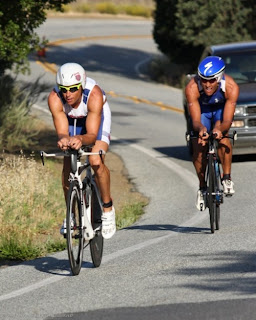 When we hit transition he was right on my heels. We exited together and we ran shoulder to shoulder for the first couple miles. Again, Macca was willing to let me set the tempo and I knew that it was up to me to try and break him. He is one of the best runners in the sport so breaking him would be very difficult, especially with such a short run of only 5 miles. As we hit the halfway mark I tried to pick the pace up a little. He was still on my shoulder and with a mile or so to go I put a surge in and held a hard tempo. Not being in this situation very much I was not sure what the best game plan would be. I knew there was a sharp left hand turn with maybe 30 meters to go to the finish, which was a slight downhill. I figured if I could keep Macca behind me into the turn it would be to late for him to come around and out sprint me. For the last mile the tempo was fast and he was on my heels. I had that edge as we came to the turn and I took the inside so he couldn’t come around. The turn was on a ramp that went over a ditch. I took the inside of the ramp and Macca made the quick instinct to jump over the ditch, which put his shoulder in front of mine. Now he had the upper hand and the advantage as we sprinted for the finish. I could not get around him as we hit the finish with just inches separating us. 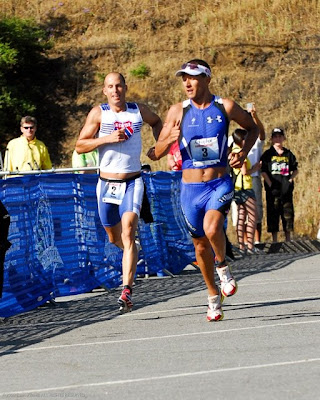 It was a great finish and a great race. A lot learned and experience gained for the next one. Macca is one to watch out for this year at the Ironman World Championship as he is a factor every year. Come October if I find myself running with him like I did in 2007 I will be better prepared and more wise. I look forward to that day and any day I can challenge myself against the best. It is the only way I will get better.

In a little over a week I will be competing in Hawaii with the current Ironman World Champion, Craig Alexander. Another great runner and probably the best right now. I am really looking forward to the challenge and the experience I will gain. I am learning every race and improving as I go. I will always shoot for the win and put myself in position to do the best I can to take the victory. This last weekend I was there and I missed the win by a very small margin. Next week I will be in the right place and hopefully bring home the victory.
Posted by Recovox at 10:17 AM