Ivan Basso - Checks In From The Giro 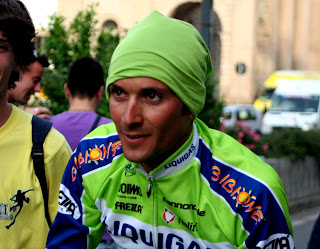 We are already over halfway into the Giro d'Italia as I write this in my hotel room in Florence. It is hot here, but I have the window open to let the Tuscan breeze carry me through my recollection of the last days and calm me ahead of what will be a high-intensity second half.

I can say that I am more or less satisfied with my first Grand Tour after three years. Clearly, I wanted to be higher up in the classification at this point, but it is not so bad considering those who are ahead of me. There are riders who have ruled the past Grand Tours: Denis Menchov won the Vuelta, Carlos Sastre won the Tour, Levi Leipheimer was on the podium at the Tour and Danilo Di Luca won the Giro.

Then, even within my own team, there is Franco Pellizotti. He finished just off the podium of last year's Giro d'Italia, when Alberto Contador won and I was only re-starting. You have to consider that I am right behind all of these high-level riders.

I am not intimidated or scared of them, mind you. The ambition is clear: to do better and better over the next stages. There are still three mountaintop arrivals where I can stake my claim. The long climbs of the Monte Petrano stage, Blockhaus and Vesuvio will be my stomping grounds and I have to have faith, through and through. I can guarantee you that the last week will be full of surprises.

I mentioned Pellizotti above because he is one of the big favourites for this centennial Giro d'Italia. The team leadership situation is just like in the past when I raced with Carlos Sastre at the Tour de France. Up until now, we both have ridden up front at the tail end of a stage. He will try a move and then I will try a move, it is a perfect division of leadership.

Menchov showed his strength in the time trial on Thursday, even if I had gone to train on it more than any other rider had. In my head, I had the idea to go a lot stronger. The reality is that it was a stage with many changes in rhythm that required you to have good bike handling skills and the condition to ride a time of 90 minutes.

I think that my time could have been a little bit better, but I am okay with the time as it is.

Coming through the window are sounds of fans who have just witnessed Cavendish's third stage win. It has been an amazing Giro d'Italia for his team, from Venice to Florence, 13 days.

The days blur by when you are within a three-week race. It is the same everyday, after the stage I arrive and I have a small lunch, have a massage and relax. Often I am talking to my family via the computer or telephone.

If it involves computers, it also involves my right hand man and roommate Kjell Carlström. He is always helping me out, as I mentioned in my last post. A lot of the time, we will just put the computer aside and talk, old school style.

We talked about the ride of Lance Armstrong in Thursday's time trial. He had a very strong ride if you take into consideration he had a broken collarbone a month and a half a go.

He is doing wonders for this year's Giro d'Italia. I look around everyday and see hundreds of fans waiting for me, but it is nothing when you see the numbers that are there for Lance. I take a peak and I can tell that they are all so happy to get a photo or an autograph from him.

It is better this way, the fans can keep him busy and Pellizotti and I will get about with the rest of the Giro. We are going to do what we can to dethrone Menchov prior to the time trial in the Eternal City of Rome.