Armstrong: "It's been a hard three weeks" 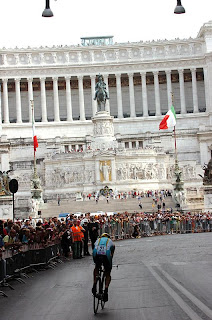 Astana won the team classification at the Giro d'Italia but Lance Armstrong was already in Rome airport when his team mates climbed onto the podium in the shadow of the Coliseum.

Armstrong rushed to Aspen because his girlfriend Anna Hansen was about to give birth to his fourth child.

With the Roman roads still wet from the rain, Armstrong rode a cautious final time trial. He finished 53rd, 1-19 behind stage winner Ignatas Konovalovas (Cervelo) and so was 12th overall at 15-59. Team mate Levi Leipheimer was sixth overall at 5-28.

Armstrong has not talked to the media at the Giro since the protest during the Milan Show stage two weeks ago. He has often tweeted and posted video, and the Astana team issued a press release with his final thoughts on the Giro.

“I came in (to the Giro) open minded. I did not know what to expect, obviously because of the crash in Castilla y León, the time off the bike and the trip over here. In my view it has been a hard three weeks,” he said.

“In the second half of the race I showed that I was certainly getting better and I think we can take that away from here. It is promising for June and July. I may have disappointed some fans and people in the pressroom, expecting that I immediately should start winning big races. That is crazy. I am almost 38 years old. Both of my feet are firmly on the ground. It's taking a lot of work up to this point but we might ride strong and be in the front in July.”

“The style of racing in Italy is different, but I liked it,” continued Lance Armstrong.

“Despite some dangerous stages, it was a great race. The Giro del Centenario brought us to the most beautiful places of the country. The people here are enthusiastic. In the Giro I spent more time with the fans than with the media. It was cool and fun hanging around with the tifosi.” 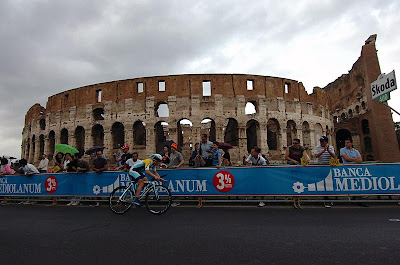 Armstrong's Astsna team-mate Levi Leipheimer posed for photographs in front of the coliseum, satisfied with his Giro.

“I am not disappointed. Over the three weeks, there were five guys a bit stronger than me,” he said.

“Basically I decided to do the Giro more out of preparation for the Tour de France. I raced here against riders that were really targeting this race. What makes me happy is that I finished the Giro a lot stronger than last year and that we rode as a real team.”

“Lance Armstrong proved to be a good domestique, but also Steve Morabito, Andrey Zeits, Jani Brajkovic, Chris Horner, Dani Navarro, Yaroslav Popovych and Chehu Rubiera gave me a ton of support. Of course I would have preferred to win a stage. In the historic time trial of Cinque Terre I was very close to it, but already there Denis Menchov was better. Today, I preferred not to take any risks.”

The Giro ended with the future of the Astana team still in doubt. Some wages have been paid but other debts remain. However Team manager Johan Bruyneel is confident the team, in some form or other, will ride the Tour de France and next week's Dauphine Libere and the Tour de Suisse.

“Up to the Giro, Levi was undefeated this year. He has to be pleased with this race and the season he has had so far. A three-week Tour is very exhausting, especially on the mind,” Bruyneel said in the statement.

“I am hopeful and confident that we can ride those races. The financial woes that left salaries unpaid are not completely resolved yet. I hope that the team sponsors will meet the deadline for the bank guarantee and the payments. Moreover the UCI now wants more guarantees about the team for the rest of the year.”

“The UCI will decide soon about the near future of the Team. We hope to know more in the coming days. The best solution is that we can continue with our current structure. I expect that we will have a team at the start of the Tour de France.”
Posted by Recovox at 2:41 PM