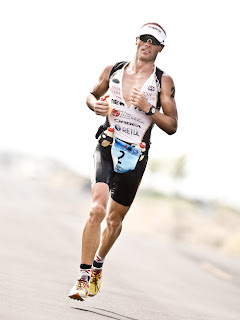 Australians Craig Alexander and Belinda Granger resurfaced onto the race scene with wins at Ironman 70.3 Hawaii.

While the pro field at Saturday’s Ironman 70.3 Hawaii was not long (only 17 pros started), the storylines among the day’s top pros were numerous. Australians Craig Alexander and Belinda Granger claimed the victories in Hawaii after a few months off for each. Alexander chose to sit out from the race scene so he could spend time with his family and newborn baby, while Granger was sidelined after having surgery on an artery in her stomach. Prior to their hiatuses, the two had begun successful race seasons with Alexander winning Ironman 70.3 Geelong and Ironman 70.3 Singapore, and Granger winning Ironman Malaysia. Canadian Samantha McGlone also had a successful comeback, finishing second in Hawaii after taking more than six months off of racing and training to deal with Achilles tendinosis.
Posted by Recovox at 7:34 PM