Cheeky Cipo Sneaks A Ride At The Giro 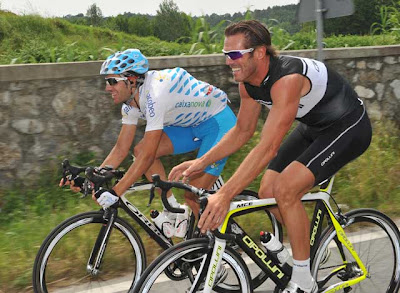 Mario Cipollini may have retired for good in 2008 when he pulled out of the Rock Racing team but even at 42, he couldn't resist getting on his bike and riding with the Giro d'Italia peloton on Friday.

Cipo joined the peloton for a few miles near his home in Lucca and then jumped ahead to the finish in Florence to see Mark Cavendish win his third stage of this year's race.

Cipollini is a big Cavendish fan and thanks to Max Sciandri, the two went training together several times during the winter.

Cipollini is occasionally critical of Cavendish in his blog published every day in Gazzetta dello Sport during the Giro but only because he wants him to be as successful as possible.

“I think Cavendish is a huge talent,” Cipollini told us after seeing Cavendish win yet again in Florence.

“He's a going to be a great sprint 'campione'. He wasn't at his best when he started the Giro but like all the great riders, he's got better and better, and still won when he's not at his best.”

“He's still got things to learn but he's special. You have to be special when you win Milan-San Remo at your first attempt and then come to the Giro not at his best and beat people like Petacchi and everybody else.”
Posted by Recovox at 11:50 AM