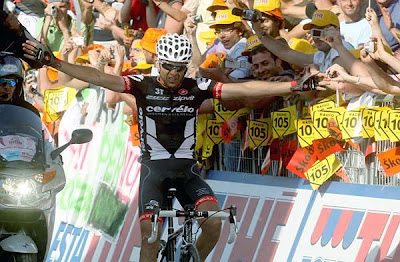 Sastre escaped the peloton early on the finishing ascent of Vesuvio, bridging to Ivan Basso (Liquigas), the climb's early aggressor. Inside of five kilometres remaining in the stage, Sastre dropped Basso and ascended at a steady tempo all the way to the summit finish. While Sastre climbed away to stage honours, Di Luca and Pellizotti repeatedly attacked on the ascent trying to crack the maglia rosa Menchov.

Pellizotti managed to close the GC gap by several seconds on Menchov, but Menchov's attention was clearly focused on staying with Di Luca who he led by only 26 seconds at the start of the stage.

Early in the stage, after only 16 kilometres of racing, Mauro Facci (Quick Step) and Yuriy Krivtsov (AG2R La Mondiale) attacked and built a lead of seven minutes over the peloton. The duo maintained their escape for nearly the entire stage, but were no match for a LPR Brakes-led peloton which swept them up at the beginning of the 13-kilometre climb of Vesuvio.