Leipheimer "Lance had to wait for me today" 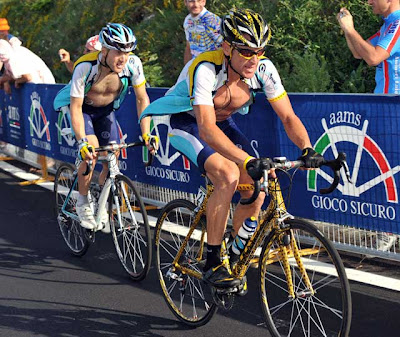 Levi Leipheimer (Astana) lost two and half minutes to all main rivals in the Giro d'Italia on the climb to Monte Petrano and dropped from third overall, 43 seconds behind Denis Menchov, to sixth at 3-21.

Leipheimer was unable to hold the pace when Ivan Basso and Carlos Sastre began to attack on the climb to the finish and claimed it was only thanks to Lance Armstrong that he didn't lose even more time.

“I was not as strong as those guys, it is plain and simple, they were stronger. Today was the day that separated everyone and you see who's strong and who's not…” he admitted.

“Immediately at the bottom of the climb, they started going faster and I didn't feel strong enough to go with them. I don't feel as strong as before and you see the difference between a seven-time Tour winner like Lance. He was stronger and he had to wait for me today. I just did not feel like I had it today.”

Lance Armstrong played the perfect domestique in the finale. He initially went with the leaders and got up to Menchov's group but then eased up, waited for Leipheimer and paced him up the second half of the climb.

“(Without Lance) I would have lost much much more time. He saved me minutes and minutes,” Leipheimer said.

Asked if he can recover and come back on Blockhaus on Wednesday, Leipheimer could offer a brave but unconvincing “I'll try, I'll try.”

He could perhaps pull back time in the final time trial in Rome and perhaps even push for a place on the podium but he must know that his chances of final victory ended on the slopes of Monte Petrano.
Posted by Recovox at 12:02 PM