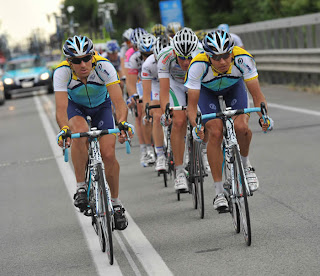 After a day-long unsuccessful break on Monday, Popovych was ready to go again on stage 18: "Before the stage I asked Johan if I could try again. I was feeling good, recovered well after Monte Petrano and since we're not in the GC hunt, I thought I could do something nice. It was also good to be with Andrey Zeits. He's a young Kazakh rider and I have a lot of experience as a professional rider. I tell him to go or to be careful or to look out for this guy. I thought he had a very good chance to win or do something today, but regardless it's a great experience for him and to learn. I think he has a very bright future and if I can help him, then great."

With the blistering heat now passed, rain fell during part of the stage, bringing up diesel on the roads and making them slick as ice, resulting in various accidents including the one described by Zeits.  The break included riders from almost every team and gained a time advantage of five minutes.  In the peloton Rabobank set pace for leader Menchov while LPR looked after the interests of their man Danilo Di Luca who is 26-seconds back on GC.  But with many sprinters already out of the race and the tired-factor weighing heavily on those still riding, there was little interest in catching the breakaway today.  Saxo Bank’s Jason McCartney tried an early break from his companions at 10km to go but was brought back, as were other late attacks near the finish line in Benevento.  In the final drive to the line it was the little uphill pitch that sealed the deal for Scarponi as he claimed his 12th career victory.

Regarding today’s stage and what is still to come, Sports Director Alan Gallopin said, “We did what we had to do. We now want to win the Team GC so we had to control the two Columbia guys. Hopefully we can do something special in the next few days."

What’s left to ride in the 92nd Giro d’Italia that still could make a difference in the final outcome?  Friday is the last climbing stage as the peloton rides up the world’s most famous volcano, Vesuvius.  It’s the last opportunity for Di Luca to dislodge Menchov before the time trial in Rome on Sunday. Known for excelling in the discipline, it isn’t likely that the quiet Russian would lose time to Di Luca on the time trial stage, which makes Friday all the more important if a shake-up is going to occur.   And that’s a big “if” at this stage of the game.
Posted by Recovox at 11:08 AM