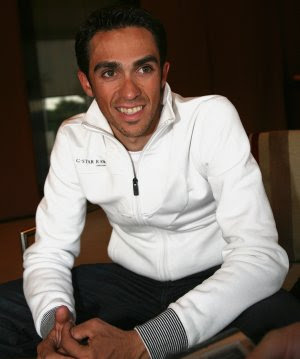 Alberto Contador of team Astana concluded a five-day training session in the Alps in which he previewed four stages of this July's Tour de France.

While in the Alps Contador previewed stages 15-18, comprising three road stages and the final time trial.

"I began with the uphill finish in Switzerland, in Verbier, which is new," said Contador, the 2007 Tour de France champion. "It's a hard finish, but I don't know how much of a difference it will make among the favourites. I don't know if it's tough enough, though it's good for me. Then I saw the Grand and Petit Saint Bernard, a stage in the third week, after the second rest day. It will be a day of attrition, though it depends on how the general classification goes and if there are brave people who wants to animate the race The altitude will also will be an important factor.

"We also saw what I consider the queen stage of the Tour [stage 17], finishing on Le Grand-Bornand," continued Contador. "Although it is not very long, only 169 kilometres, it has five difficult mountain passes, beginning with the Cormet de Roselend, which is climb from the start, and ending with the Romme and Colombiere climbs, with the finish line only 15 kilometres afterwards.

"Finally, we have seen the final, 40-kilometre time trial in Annecy. The course is flat enough and there are no complicated curves. The only prominent feature is a three-kilometre climb at kilometre 25, after which the course is favorable. In spite of everything it will be a difficult time trial because it's the day after the queen stage."

Contador plans to recover from his trips to the Alps in order to prepare for the next race in his schedule.

"I did some good base work thinking about the Tour," said Contador. "I gave myself a few good beatings in training so next week I will recover a bit, because on Sunday [June 7] I begin again with competition".

Contador will compete in the upcoming Dauphiné Libéré which takes place June 7-14.
Posted by Recovox at 6:43 PM