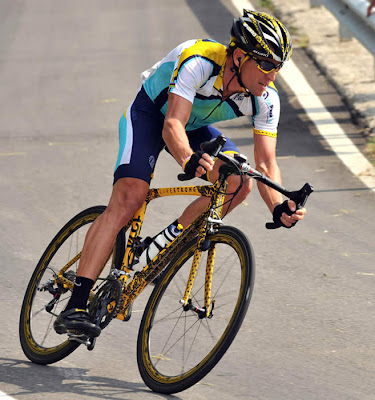 Regarding the condition of seven-time Tour de France champion Lance Armstrong, Bruyneel commented after the race:

"For Lance, he's feeling better and better. Today he was looking good and feeling good and that's what we want. I think some people are disappointed with the first two mountain stages. But I think it's expected if you consider 6 weeks ago he was in the hospital having collarbone surgery. People were questioning if he was going to race the Tour. He had a good Gila, comes over here, looks good in the TTT and all of a sudden people think that he's going to be there with the favorites, but you have to be realistic - he's coming back after three years, didn't do any big races yet, no real big climbs. I like what I see. And I expect him to improve. I'm not expecting results. I know he wants to try for a stage win because champions always need confirmation because a win is win. But I would like to see that he feels good on the bike and is there with the favorites and the big guys in the mountains in the last week".
Posted by Recovox at 1:37 PM