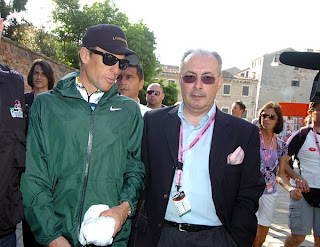 Giro d'Italia race director Angelo Zomegnan expressed his anger at "older riders" for leading the rider protest which eventually neutralized the ninth stage in Milan. The Italian dismissed claims made by several riders that the course was too dangerous, and speculated that the true reason for the revolt was that certain older riders lacked the power to handle the course's many turns.

"This circuit required explosive bursts. It required riders to get their butts up off the seats of their bikes, and some riders who are not so young anymore apparently don't feel like doing that," Zomegnan told the Associated Press. "Instead, it seems like their legs have become shorter and their tongues longer."

When asked if he was referring to Lance Armstrong, Zomegnan refused to specifically name the rider who the race had invested so heavily in attracting as the culprit. "I never name people who have disappointed me, just like I don't name girlfriends that have snubbed me."

Several riders acknowledged that the American was behind the move and many agreed with his reasoning. But Katusha's Filippo Pozzato thought the decision to raise objections mid-stage led to chaos.

Cédric Vasseur, president of the professional teams organisation (CPA) and a former teammate of Armstrong, gave his support to action.

"I fully agreed with the reaction and position of the riders during the Milano stage and I am totally satisfied with the decision they all took to neutralize the time in such a special stage," Vasseur told said.

There were some critics who said the riders failed to provide a show for the thousands of spectators who came to Milan to witness the stage, but Vasseur disagreed. "I really had the feeling that the riders offered a great spectacle to the people who were coming to see a bike race.

"I can understand that the race organizers are a little frustrated about how it went. I guess they could predict such a reaction as they are more than anybody else concerned about safety in race and security for the athletes.
Posted by Recovox at 9:31 AM