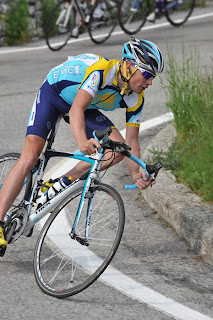 Today was the first day in the big mountains for this year's Giro d'Italia. It is an unusual start for a Grand Tour, since the first week is generally flat. But that reflects the uniqueness of this year's Giro - which will make it exciting to be a part of and watch, since it will be very unpredictable all the way to the end!

Six miles into today's stage, the day's break went clear. With Jens Voight in the break, everyone knew that the break actually stood a good chance of going all the way to the finish. The man is known as a monster on the bike, especially in breaks, and if you let him off the leash even just a little, you will really regret it later.

The pace was fast but steady all day. On the first big climb of the day I was expecting the race to heat up and fireworks to fly. Instead, it was very steady and smooth all the way to the top. With a crazy decent following, it was crucial to be at the front of the bunch over the top of the climb, since there were lots of tight turns and narrow roads to get through before we hit the bottom. The Astana team rode as a group near the front up the first climb and down the decent to make sure that we stayed out of trouble.

The middle part of the race was about maintaining the status quo. A few teams were working to keep the break in check, and our team focused on the details - staying near the front and out of trouble, eating and drinking to keep our energy up (snickers and cokes for me, and healthy stuff for everyone else), and keeping tabs on things to make sure we didn't miss anything.

Just before the last climb there was another crash next to me. I narrowly avoided going down and had to ride on the sidewalk for a short time to avoid the carnage. Luckily, for once, there was no one on the sidewalk at that moment! It seems that, just maybe, I have paid my dues to the crash gods, at least for now... The close calls are stealing some energy, but they don't seem to want any skin. Knock on wood! Keep your fingers crossed for me - I'm hoping it will stay that way all the way to Rome!

When we hit the last climb of the day, the pace was still very steady and smooth. Both Levi and Lance were looking smooth at the front for Team Astana, and we had a total of six riders in the front group. It was a good situation for us, since it gave us good numbers in case anything went wrong.

The real attacks didn't start until 2 km to go to the finish. It was clear to see that even after all the talk from the big Italian riders about putting the pressure on us today, none of the big names wanted to show their cards this early in the race. We finished with a pretty big bunch, with only small time gaps separating the group at the finish. Our only problem came when Lance suffered a mechanical going into the finish, but two of our teammates were there to look after him, they were able to limit the time losses to the line to only 15 seconds.

So far my legs are holding up really well. But, I seem to be missing a just a little something that I can't put my finger on. It feels more like nerves though instead of a shortage in power or fitness. Not sure what it is, but it doesn't seem to be having a big affect on my racing at this point. And, it really might be the nerves and emotions of being at the Giro! It's been a while since I've raced a Grand Tour that I can't tell! But I guess I'll find out soon enough! With so much hard racing to come, I'm hoping it will pass soon so I can focus on using all of my energy for team!

Tomorrow is a short stage, but it should be exciting, since there will be lots of fresh bodies going into the finish. We should see some serious fireworks on the final climb with such a hard finish and such small time gaps between the superstars on the general classification. The pink jersey could be up for grabs and there are many riders who would love to take it from Columbia's young star, Thomas Lövkvist, if they have a chance! It should be quite a show!!!!

Thanks for reading! Until tomorrow...
Posted by Recovox at 11:28 AM