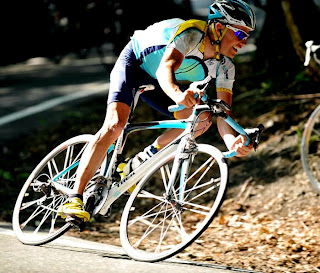 Today's stage of the Giro d'Italia had been hyped as an epic stage that would result in great battles on the road, and it didn't disappoint. It was a big time stage with big time racing - the type of stage that fans live for!

The battle began at the start line and continued for 262 km, where Di Luca crossed the finish line with his arms raised in victory. We rolled away from the start town doing 30 mph, and we reached the first climb of the day, 50 miles later, with the same average speed.

Normally the break should have been established with a decent gap by the first climb, but not today. The first climb was not even rated on the profile, since it was only 3 miles long. But it was steep, and the field started to explode on the way up as the attacks continued to come from all sides.

I was having a great day at that point. My legs felt great after the rest day, and I was excited to be part of such a cool stage. However, things soon changed for me, unfortunately. When we hit the top of the climb, I was in great position going over the top, sitting in about 20th spot as we started the descent, and feeling pretty good about life.

That abruptly changed in the first turn when two riders went down in the corner, leaving me with nowhere to go but down. I rode straight into the hillside. Thankfully, I managed to just avoid a tree, but I hit the hill with my head and shoulder. Luckily the leaves and dirt were thick enough to help absorb some of the impact, but I hit my already sore right shoulder. Since it has only been 5.5 weeks since I broke it, it definitely hurt more than a little. I also hit my left knee when I went down.

As I jumped back on my bike and tried to pedal the left knee wouldn't turn the pedals. It felt like a charlie horse that took at least five minutes to loosen up. Unfortunately, it left me pedaling with 70% of my right leg for the rest of the stage, which was a problem since we still had another 115 miles of hard racing to go. Bummer...

After the climb the pace in the field continued at full speed. When we hit the second climb, the break that had gotten away on the first climb was getting caught, which started a new series of attacks. I was having a bad day by that point but there was no time to rest. I just had to bite the bullet and try to limit the damage as much as possible.

Lance was having a great day, which made up for my disastrous one. He was at the front of the field, driving the pace up the second climb, and splitting the field into a million pieces. By the time he was done, the field was down to about 30 riders in the front group.

After the climb LPR, the race leader Di Luca's team took over. The majority of the field came back together again after the descent to start the longest climb of the day as a large group again.

Sestriere, the major climb of the day, was 26 miles long, which we were hitting after over 100 miles of racing. The field was looking a little worse for wear as we hit it, as though death had come a few times already. This would be the easier part of the day, if there was an easier part...

Finally we hit the last climb of the day with 150 miles done. Basso's Liquigas team hit the climb at full gas, with each rider taking a turn on the front until he blew up. As each rider blew, another would take his place. Finally, after they had spent their entire team, Pellizotti took off, less then 2 miles from the top. Race leader Di Luca took over to try to bring him back. This is where I went out the back of the group with Cunego, so from here I had to get my information from Levi to find out what had happened up front.

Di Luca set a pace that was just fast enough to keep anyone from attacking on the climb. Then, on the descent, he dropped the other leaders in the hairpin turns, and went on to catch Pellizotti. Di Luca proceeded to drop Pellizotti on the last half mile long hill and finished solo, taking the win. It was an incredible ride from the Giro race leader, to say the least.

For me, today was a day that I wish could have gone better. But that said, I also know that it could have been much worse. If I had hit any harder, I probably would be on my way home with another broken shoulder. So while it is easy to be frustrated at how unfair life can be at times, I am also grateful for the opportunity to race again tomorrow. I will live to fight another day at the 100th Giro, and that is what matters. Also, today has given me yet another story that I will be able to tell for years to come. Like I said, it was EPIC!

Now it is time to get some rest and hopefully let the body heal so that I'm ready to go again tomorrow. The action is only getting started, so every day from here on out is going to be a great one!

Thanks again for reading! Until tomorrow!
Posted by Recovox at 2:07 PM