The Coming Out Party of the Big Guns 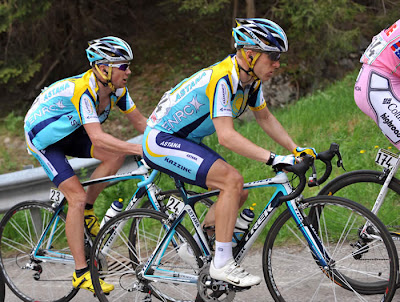 Everyone knew today was going to be special. With only 80 miles to complete for the entire stage, and most of that down hill, the final climb was going to be an all out fight to the finish.

The stage started with a five mile climb straight out of the blocks. With teams warming up before the stage to loosen up the legs, everyone was worried about just how hard the beginning was going to be.

The attacks started 3 miles into the race with a break of seven riders going clear shortly thereafter. Everyone left in the field seemed quite happy that we only had to ride two miles of the climb hard.

With the first climb of the day over in 5 miles we all settled into a good position up front for the long descent. With almost 45 miles of down hill, the day was going to pass by quickly - at least until the last climb.

The real action of the day started five miles before the last climb. At that point, it was all business, as the talking within the peloton ceased, and everyone focused on the job at hand.

The last climb was 15miles long, climbing up to 6 thousand feet. The climb was broken into two main sections, with a "flat" section in between. The first part was about five miles long and averaged around a 6% grade. Then we had the "flat" section, which was a false flat that lasted for about four miles. Finally, adding insult to injury, we still had to survive the last section, which was 6 miles long, and went straight up with an average grade of 8.5%. Ouch... There would be no rest in the final section until we hit the finish line.

As we hit the final climb, Basso's Liquigas team went straight to work. They set a brutal pace that sent rider after rider out the back of the group.

When we hit the false flat the group was already cut down to a fourth of its original size. From there Liquigas continued to keep the pace fast and hard, saving only two riders plus Basso for the second part of the climb.

When those final riders hit the front, the real suffering began. Basso's two remaining teammates increased the pace until only a dozen or so riders were left. Then, with all of his teammates used up, Basso himself took over the pain infliction.
The first of his accelerations shattered what was left of the front group, and only the riders with ambition of winning the Giro were left. And, thanks to the brutal pace, none had the legs to do anything but hold on for dear life and hope that he couldn't continue the incredible pace all the way to the top.

Luckily for us he had to recover a little before he could continue. At that point, the front group was down to six riders or so, with another group of six dangling just off the back, fighting to keep the front group in sight. The second group continued to come on and off of our group with each of Basso's accelerations. It was a constant yo-yo to the top for those guys.

Team Astana was the only team with more then one rider in the front. Both Levi and I were still there, but like everyone else, had no interest in helping Basso in any way.

Left to doing all the work, Basso hit time and again trying to get rid of us. Each of Basso's accelerations would dislodge last night's overall leader, Thomas Lövkvist, but he continued to fight back again and again. The kid showed some real spirit, which was great to see!

As we entered the final few hundred meters, Menchov gave an incredible acceleration that sent blood through my eyeballs, and the taste in my mouth.

Happier to see the finish line than you could possibly imagine, I almost fell off my bike and passed out when I crossed it. That was an epic day! But the first major test of the Giro has passed, and Team Astana is still standing. Now its time to get some rest and fuel up to get ready to do it all over again tomorrow!

Thanks for reading! Until tomorrow...
Posted by Recovox at 1:22 PM