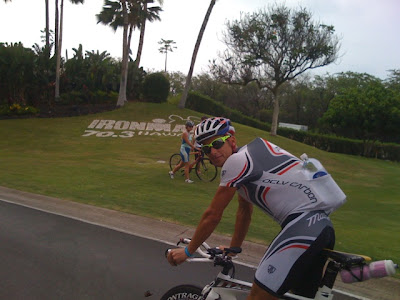 American Chris Lieto, Canadian Samantha McGlone and Australians Craig Alexander and Belinda Granger will compete at the Kohala Coast of Hawaii on May 30 after hiatuses from racing.

If you happen to be vacationing on the Big Island of Hawaii this week, you may notice an unusual number of athletes swimming, biking and running in the region. All week, several of the sport’s top athletes have been riding up and down Queen Kaahumanu Highway in preparation for Saturday’s Ironman 70.3 Hawaii. The race’s proximity to the Ironman World Championship site, as well as the high-caliber athletes that come to the island, make this an important event on the calendar. This year’s race is especially important as it marks the comeback of Canadian Samantha McGlone, and Australians Craig Alexander and Belinda Granger.

McGlone has not raced since she finished third on July 20, 2008 at the Ironman 70.3 Vineman in Sonoma County, Calif. A bad case of Achilles tendinosis has kept McGlone sidelined until this weekend, where she will defend her wins at this race in 2007 and 2008. World champion Alexander has been missing from racing action since winning at Ironman 70.3 Singapore on March 22. He has been spending time back home in Australia with his family, including their newborn baby. Fellow Australian Granger also took a break from racing after her win at Ironman Malaysia on February 28 to have surgery on an artery in her stomach.

Out to test Alexander’s fitness will be fellow Australian Luke McKenzie and American Chris Lieto. On the women’s side, American Bree Wee is likely the biggest threat for McGlone and Granger. Wee is undoubtedly the most prepared for the conditions as she lives and trains in Kona, Hawaii, and has had some early success in the 2009 season.
Posted by Recovox at 8:49 PM