Basso Discovers He Has Few Friends At The Giro 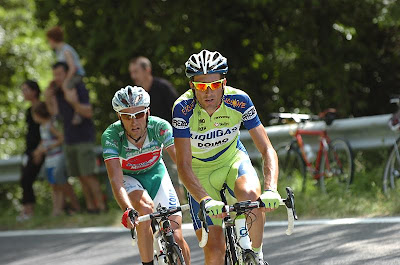 Ivan Basso (Liquigas) tried to pull back time on his rivals with an attack in the Apennines on Sunday but quickly discovered that he has few friends in the gruppo and a lot of riders willing to work for his rivals.

Basso jumped away on the Monte Casale climb, 40km from the finish in Faenza and looked determined to blow the race apart 24 hours before the toughest and perhaps decisive stage of the Giro.

Stefano Garzelli (Acqua& Sapone) went with him and the two opened a 1-15 gap on the maglia rosa group but that is as big as it got before strange alliances began to form in the chasing group.

Race leader Denis Menchov (Rabobank) let Danilo Di Luca's team mate Alessandro Spezialetti do the work and then a series of 'friends' from Caisse d'Epargne and Quick Step went on the front and helped close the gap. Even Thomas Lovkvist (Columbia) drove hard on the front but he had the excuse that he was defending his lead in the best young rider's
competition.

Basso's attack was perhaps to soften up his rivals a day before the key mountain finish at Monte Petrano. It could have dramatically changed the overall standings in the Giro but in the end it was all a waste of time and he was left with the bitter sensation that perhaps his Italian rivals prefer to see Menchov win the Giro.

The only big-name riders to lose were Lance Armstrong, Damiano Cunego and Gilberto Simoni. The Texan went back to the Astana team car during Saturday's stage and learnt what it's like to be a domestique. On Sunday he found out that he is still not as strong as the overall contenders in this Giro. Finishing with Cunego at 2-56, showed he still has a fair bit of work to do before the Tour de France.

Basso didn't stop to speak to journalists at the finish but later vented his anger on television.

“I had to do something to see how things are I think I raced well. The result isn't what we hoped but I think I had to try. I'm not interested about my rivals and making friends,” he said.

Di Luca was criticised for making his LPR team mates chase the break on Saturday and then failing to take the final time bonus. On Sunday everybody had a go at Basso. He showed he can aggressive but realised he has few friends and perhaps not the strength and power he had in 2006 when he won the Giro as a client of Dr Fuentes.

“Basso made a good attack but it was quite a way from the finish and he got caught,” Di Luca said.

“I don't know if they were chasing for Denis but we brought the break back. If some one doesn't have friends in the group that's there problem. You've got to know how to make friends in cycling…”

MENCHOV'S FRIENDS
Menchov just smiled when asked about his friends in the gruppo. He took a risk by calling Basso's bluff and letting him go, preferring to make his closest rivals and hope that his 'friends' would do enough to ensure that Basso wouldn't be able to stay away.

“It was an interesting finale. There were lots of interesting attacks today,” Menchov said in the after race press conference, again happy to compare the Giro to game of poker, knowing that he is excellent at calling the bluff of his rivals.

“Basso played a card and tried to change the race. It was a good attack and probably looked good in TV but it didn't come off. I didn't go after him because I was marking my closest rivals Di Luca, Leipheimer and Sastre.”

When asked the work by his friends in Caisse' d'Epargne and Quick Step, Menchov was slightly embarrassed.

“I know if I have a lot of friends in the peloton but some times they can be useful,” he said.

“Often a lot of things coincide in races. Some riders defend their position overall and so they have for same interests. The Quick Step rider? Perhaps he was just trying to get himself on television. The Giro is an important race…”

MONTE PETRANO: THE TOUGHEST STAGE OF THE 2009 GIRO
Menchov stopped smiling when he was asked about Monday's 237km stage from Pergola to Monte Petrano. It is twists up and down all day on twisting country roads in the spectacular Marche region and includes the climb of Monte Nerone (13.35km at 7.6%), Monte Catria (11km at 8%) and then ends with the climb to the summit of Monte Petrano (10.4km at
7.9%).

Menchov knows that if Basso attacks again, perhaps before the final climb, he will have to go after him.

“I think it's the most important stage of the Giro,' he said.

"It's long and it'll be very hot again. It' also ends with an uphill finish. I'll have to watch more riders because I know that Basso could go for a long-range attack. We'll see what happens. I have two or three riders that I have to follow them then two or three who are dangerous.

I think Danilo di Luca is a big threat but Carlos Sastre is a real wolf in sheep's clothing. He showed that at L'Alpe d'Huez in last year's Tour de France.”
Posted by Recovox at 11:19 AM