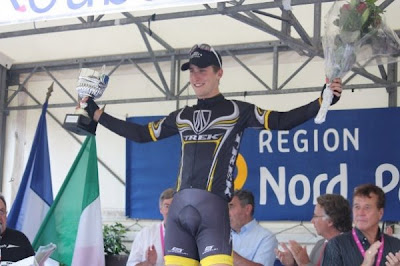 American Taylor Phinney (Trek-Livestrong) won the Paris-Roubaix Espoirs on Sunday, emerging first from a group of 11 that entered the Roubaix velodrome together.

Phinney, 18, becomes the first American to win the race for riders under 23. The 170km race has been held since 1967 and has been won by budding professionals including Yaroslav Popovych, Thor Hushovd, Stephen Roche and Frédéric Moncassin.

The group of 11 that came into the velodrome contained three riders from the Capinordic team, who massed at the front as they came on the track, said Chris De Vos, the head soigneur for the U.S. national team.

De Vos said Phinney attacked with a half lap to go. "Taylor started sprinting and damn he was so strong, nobody could follow him," De Vos told VeloNews in an email.

"Axel calls and says, 'Taylor won! Taylor won!'" Phinney said. "I put the phone to my chest and started yelling to everyone in the group, and this ripple went through the group."

Merckx handed the phone to Taylor, who told his father he did an exuberant "Phinney victory salute" on the velodrome.

Axel Merckx drove the lead team support car at the race, with Eddy Merckx in the passenger seat. "What a way to impress, huh?" Davis Phinney said.

Taylor Phinney competed in the junior edition of Paris-Roubaix two years ago, crashing three times but vowing to return and win, his father said.

Davis Phinney rode the professional Paris-Roubaix four times during his career, in support of teammates Steve Bauer and others.

"I sucked in Roubaix," he said. "I didn't have the suppleness over the cobbles that Taylor has."

He said he was a little surprised at his son's performance because Taylor had told him Saturday night that he had a sore throat and felt he was getting a cold.
Posted by Recovox at 8:59 PM