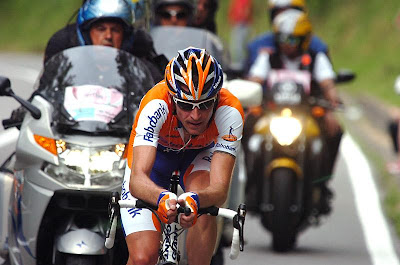 Denis Menchov's magnificent effort against the clock, his second stage win of this year's Giro d'Italia, erased his overnight general classification deficit of 1:20 to Danilo Di Luca (LPR Brakes), who finished the stage in 6th place, 1:54 behind Menchov.

Michael Rogers (Team Columbia-Highroad) started the day in third place on general classification, but dropped to sixth overall due to a sub-par performance in the time trial where he finished 14th, 2:46 behind Menchov.
Posted by Recovox at 9:24 AM