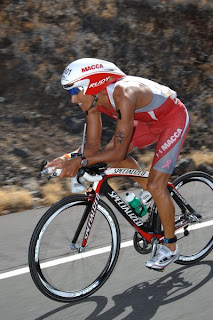 In what was a truly perfect California morning with just a touch of breeze, not a single cloud in the sky and quickly warming temperatures, the men's field kicked off at 7am at the UVAS Reservoir just outside of Morgan Hill California. The water's warm temperatures were only a sign of things to come as "the Chris's" scorched the course, battling throughout the day in temperatures that reached the mid nineties.

Australian Chris 'Macca' McCormack started as the race favorite, and as he often does, delivered on the day coming away with yet another victory and a new course record.

The pro field went off together, with both men and women in a deep water start. The young up and coming Aussie, Michael Murphy, was quick to take the lead in the swim with the always consistent and defending Champion, Brian Lavelle right on his feet. Both Mccormack and Lieto were close behind leading the chase pack.

Murphy led the way out of the water and into T1 after a quick swim with Lavelle just two seconds back and McCormack only eight seconds behind Lavelle. Lieto rounded out the top four just twelve seconds behind McCormack. Out on the bike, McCormack immediately made his presence felt, passing both Murphy and Lavelle to take the lead. Lieto was also quick to close the gap, eventually taking the lead himself. McCormack and Lieto couldn't shake one another on the 18 mile bike course that seemed to be a never ending series of rolling hills. With temperatures quickly climbing and after putting a sizable gap between themselves and the remainder of the pro field, McCormack and Lieto came into T2 still neck and neck.

McCormack, always the transition expert, made quick work of his change from cycling shoes to running shoes and was gone in a flash. Lieto, quick to follow, had a good exchange himself and they were off. Four miles into a five mile run they were still running shoulder to shoulder with no time separating them. Now 94 degrees out, the athletes rounded the bend for home, engulfed by a loud and eager crowd welcoming them in. McCormack, a former short course World Champion, was able to get a gap on Lieto as they approached the finish. Not able to match McCormack's closing speed, Lieto fell back but it turned out to still be close with only a two second difference. The lovable Aussie was yet again victorious and of course smiling at the finish. Lavelle finished with a strong third place, with the young Murphy taking fourth.

"I can't seem to escape the hot races this year" McCormack laughed. "Singapore, Hawaii, New Orleans, China and now here. Though I do love this California 'dry heat'," he said with a smile. "I'm looking forward to getting over to Europe and hopefully some cooler events."

When asked of his performance, McCormack stated, "I've been training right through this race, so I was happy with the win today. I rode just over 6 hours yesterday with the Specialized boys and ran well over an hour last night. I have some big races coming up in Europe starting next weekend and need to keep my milage up. Plus, it's always nice to get a win in the backyard of your sponsors. Both Specialized and Clif Bar have been here all weekend supporting me. I can't thank them enough."

McCormack will be racing the 70.3 Half Ironman in Austria next Sunday, May 24th. Among other races while in Europe, he will also be defending his Ironman European Championships crown on July 5th in Frankfurt Germany.

got a nice photo of mr. McCormack emerging from the water en route to his victory at the morgan hill sprint triathlon: