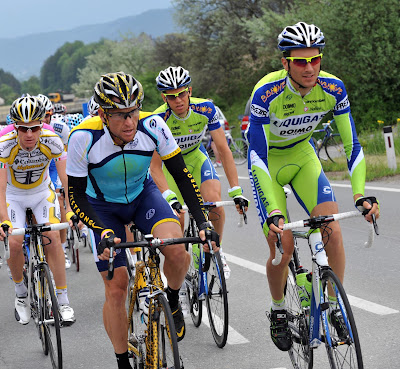 Barely had the riders finished stage seven of the Giro d'Italia today, before Lance Armstrong launched a stinging attack on the stage route via his Twitter site.

The Texan was dismayed at the inclusion of the long descent into the finish town of Chiavenna, a winding road made even more dangerous thanks to the pouring rain and bad visibility.

"Done with st 7," Armstrong posted. "I've seen it all now. 25 mile fast decent to the finish. In the pissing rain. Makes no sense. The boys in the bunch are livid."

The race organisers effectively neutralised the stage finish due to the weather, giving riders their times at the 3km-to-go mark to avoid any unnecessary pile-ups in the finishing straight.

The stage was won - safely - by Edvald Boasson Hagen (Columbia-Highroad). Although treacherous, remarkably no one crashed or suffered injury as a result of the weather.

This is Armstrong's first taste of riding the Giro d'Italia, and the seven-times Tour de France winner seems to be experiencing a roller-coaster ride. He was 'blown away' by the reception in Venice, but has since suffered in the mountains, losing time to his rivals.

To add to his woes, his Astana team are also suffering from non-payment of rider wages from key sponsors. The entire team started the stage wearing jerseys with sponsors names faded into obscurity.

On Thursday, Italian paper Tuttosport reported that Armstrong would not complete the race, instead returning home to be with his heavily pregnant girlfriend.
Posted by Recovox at 11:50 AM