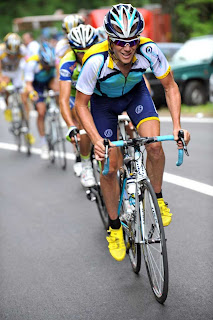 With two long stages done, we were on to Stage 8 of the Giro d'Italia. At only 130 miles it seemed like the day should feel like a walk in the park - at least compared to what we had just lived through in the past two stages.

With climbs at the beginning and end of the profile, it was going to be another day for the favorites to test themselves and one another - not to mention try to put time on their rivals in the quest for the overall win.

In another facet of the Tour of Italy, I thought I would give you my calorie count from one of the past two epic stages. This should begin to explain why, as each day passes, the desire to eat becomes harder and harder.

Breakfast: 1,100
Bowl of cereal with two yogurts in it, an omelet with 3 eggs and ham, bread with jam, and hot tea with about 6 tsp. sugar.

At hotel: 450
Bowl of cereal with milk and honey, crackers.

After a while, it gets hard to choke down that much food every day! But at least we have a great staff and a great chef to keep things tasty and interesting.

And on another good note, last night was the first time I was able to wear T-shirts again. The biggest problem with a broken collarbone is not being able to pull anything on over my head, which means a lot of button down shirts and full zip hoodies. Being able to wear a T-shirt is a good sign of improvement. My shoulder is close to being pain free again, which has made life in general easier and better!

The day started out fast, with flat roads for the first 15 miles. Once again there were nonstop attacks coming from every angle, but nothing got away before the first climb of the day, which was 3.5 miles long. As a result, it was all out up the first climb.

About half way up it, a big group of 10 riders or so got away. It looked good, but the Lampre team had no one in it and weren't happy about that fact. They rode flat out along the false flat until we hit the next climb, which was about seven miles long and very steep. The gap to the break was at 2.5 minutes, and Lampre was still riding all out to try and get someone in it.

The hard pace had reduced the field to about a fourth of its original size by the time we hit the summit, which meant that people were a little unhappy. Lampre had made no friends in the field today. As we reached the top of the climb, the team was blown, and they had no one left to finish off the job. The pace slowed, and every one who had gotten dropped up the climb found their way back to the field. As more riders got back in the field the complaining started.

Personally, I started to do damage control for my legs. At this point after so much effort on the first two climbs, the muscles in the legs were feeling tired. At that point, there's not much you can do to make them 100% again.

It's like a boat taking on water from a hole in bottom. The best you can do is stick a rag in it and try to make it home. In my case the rag is eating as much sugar as possible to try to flood my body with energy to ride in on.

The last big climb of the day was host to the next big showdown. At four miles long it would end up destroying the field. Once again, Lampre was the first to light it up, with Damiano Cunego attacking hard. I followed directly on his wheel, and we got away in a group of six. The number of riders in our group kept changing all the way up the climb as some would get dropped and others came across from the field. I was focused on following attack after attack from Cunego, Stefano Garzelli and Franco Pellizotti.

Then Levi Leipheimer, my Astana teammate and our top rider in the Giro so far, arrived. I immediately went to the front of the group and started pulling all out. I gave it everything, going totally cross-eyed from the effort, but we went over the top of the climb with a 55 second advantage on the field. With 15 miles to go I thought for sure we would make to the finish, but three or four teams chased from behind to bring us back with nine miles to go.

From here it was only one more short but steep climb before the finish. As we hit it, race leader Danilo Di Luca attacked just as we got on the cobblestones. I jumped again to get on his wheel, and just about passed out trying to hold on. My body was so far in the red it was probably purple at that point! When we hit the top it was all downhill to the finish. Since the favorites were all together, from there there was nothing for me to do but stay out of trouble and wait for another day.

The legs are feeling great, and the team is riding incredibly strong. Levi, Lance Armstrong and I are getting better every day! So now its time for me to go to dinner and patch up the holes, so I'm ready to go again on Sunday.

Thanks for reading! Until tomorrow...
Posted by Recovox at 1:43 PM