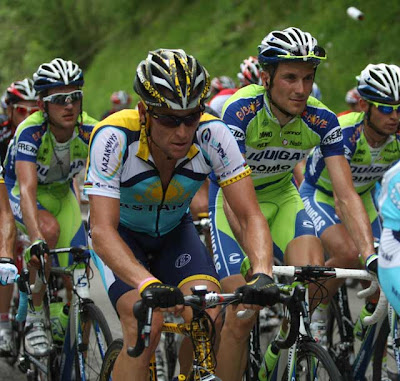 Lance Armstrong (Astana) finished just 15 seconds behind winner Danilo Di Luca (LPR) and new pink jersey Thomas Lovkvist (Columbia) but the pain in his eyes just after he crossed the line indicated he had gone much deeper than most of the overall contenders in the Giro.

It reminded many of the ghost-like empty expression Armstrong showed after the finish of the 2003 Tour de France stage to Luz Ardiden when he crashed, chased and attacked to seal victory. Now he had suffered and finished 32nd.

After crossing the line, he fought his way through the finish scrum, took a drink, put on a gilet and then quickly headed off back down the road to the Astana team bus without saying a word.

In a Twitter message Armstrong said: “Stage 4 done. Uphill finish. Legs weren't bad and made it almost the whole way. Came off a little at the top. Not bad for 1st big climb in…”

Later the Astana team issued his words on the stage.

“We finished with a big group and I lost 15 seconds, but that is not so much,” Armstrong said.

“Moreover, I needed to make an adjustment to the derailleur. Of course, it was not a very difficult climb.”

“For Di Luca it was a perfect finish with the gradual climb. Basso, Di Luca, Garzelli and Cunego all looked very good.”

"Tomorrow will be a better indication. It will be a long and hard day. We'll see. I don't know what to expect. I am happy with my performance of today. This was my first big climb since retiring. I had a good feeling and no collarbone pain at all."

Armstrong took some comfort by the breakaway attempt of fellow veteran Jens Voigt.

“He is a machine, a tough guy. Whenever you give him a minute, he is dangerous. Even as an old man, one day older than me, he is one of the strongest in the bunch,” Armstrong concluded.
Posted by Recovox at 11:21 AM