Giro could be last race for Armstrong's team 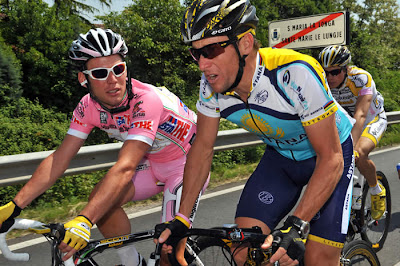 Astana team boss Johan Bruyneel has admitted that the Giro d'Italia could be the last race for the squad after the Union Cycliste Internationale (UCI) set the Kazakhstan team a deadline of May 31 to pay its riders.

“I know they [the UCI] sent a letter to the (Kazakhstan cycling) federation, giving them a deadline of May 31.

"That's the deadline to arrange the whole financial situation. If it's not taken care of by then, the letter says that the team will be suspended,” Bruyneel said.

The only good news was the deadline was the same day as the end of the Giro d'Italia in Rome.

“At least we're going to be able to finish the Giro," Bruyneel said, perhaps hoping that Lance Armstrong can find a backer to take over the team from June 1.

Previously, Armstrong has said that he is actively seeking to find sponsorship for a team and has been quoted as saying that this could happen before the Tour de France in July. With a payment deadline set, a new sponsor will have to be found sooner rather than later.

Armstrong himself currently takes no payment from the Astana team, instead funding his riding privately - through personal sponsorship and appearance fees.

It's likely that any new squad would be headed up by Bruyneel and part-owned by Armstrong. Armstrong's cancer awareness foundation Livestrong is likely to feature heavily in the team name.
Posted by Recovox at 12:34 PM