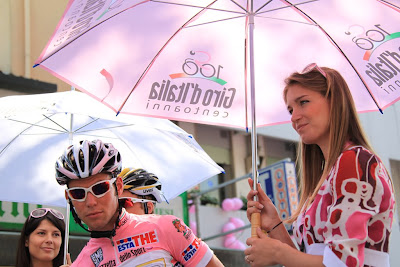 Twitter messaging is all the rage in the Giro peloton but Britain's Mark Cavendish is not one of them.

On Friday someone registered the Columbia-Highroad sprint ace's name as an account and posted various messages in the build-up to the opening team time trial stage.

One message said: “Slept well, dreamt of pink, LOL.” Another was “Just been on the bike, legs feel good. Come on!!!!”

Unfortunately for his many fans, Cavendish will not be Twittering any time soon.

"I don't think I'll start Twittering because I'd probably cause too much trouble,” he said.
Posted by Recovox at 1:08 PM