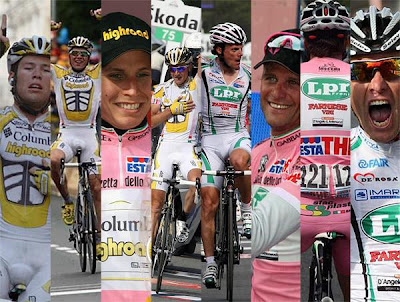 Nine stages have passed and so far the Giro d'Italia has been a tale of two teams: Columbia-Highroad, winner of the team time trial and three individual stages, and LPR Brakes with overall leader Danilo Di Luca and three stages to its name.

Both squads have dominated the post-stage podiums in nearly every classification, which begs the question: can anyone challenge them?

As befits the Giro d'Italia's centenary celebrations, the first week of this year's edition has piled on more kilometres and climbing than that of any Grand Tour in recent memory; only the strongest riders have come out of it with a hope of taking home the maglia rosa in two weeks' time.

The riders have not only had to deal with soaring peaks, but the inevitable and precipitous descents which have pushed the boundaries of safety.

Riders have complained mightily of descents which have seen them top 110km/h and arrivals through towns where the width of the road is little more than two metres and traffic islands provide additional danger. Add a horrific accident in which Rabobank's Pedro Horrillo plummeted 60m into a ravine, and it's no wonder the peloton refused to contest the technical and ill-prepared Milan-100 circuit.
Posted by Recovox at 9:33 AM