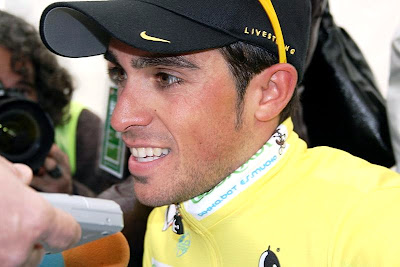 While the world of cycling is watching the peloton take on the roads of Italy at the Giro, Astana's Alberto Contador has travelled to the Pyrenees in order to reconnoitre the Tour de France stages coming up in the Franco-Spanish mountain range in a few weeks time.

The 2007 Tour de France winner concentrated his efforts mainly on stage seven's mountain top finish to Andorra's ski station Ordino-Arcalis, as the other two stages in the region do not end at altitude. "There was so much talk about this climb that when I saw it, it was a pleasant surprise," said Contador after the ride on Tuesday this week. He was joined by Benjamin Noval and rode the Tour route leading up the mountain a total of three times, preparing his assault on the 2009 Grand Tour victory.

The Spaniard was happy to find out that the 10.6 kilometre-ascent averaging 7.1 percent gradient was well-suited to his characteristics as a climber. "It's an ascent to my taste, much more than La Rabassa [2008 Vuelta stage seven finish - ed.] or Pla de Beret [2006 Tour stage 11 finish - ed.]," said Contador, who still noted that the stage will be a tough one nevertheless.

"There will be no difficulty in the stage before the climb [except the Port d'Oliana mid-way through the stage - ed.], but we will arrive at the foot of the ascent with 200 kilometres in the legs and thus with less power. The same goes for the fact that this stage comes at the seventh day of racing, when we won't have reached the first rest day yet."

The 26-year-old figured that the stage leading up to Ordino-Arcalis would be "raced very fast", but did not think that it would be a race-decisive day. "Depending on everybody's intentions and the speed in which it will raced, many riders will lose some time here, but it is not a day to win the Tour, either," he said.

Contador made sure he knew all the details of the stage taking place on July 10. "As soon as we pass Andorra La Vella [with 28 kms to go - ed.], the road goes uphill. Although there are some stretches to recover, this first part of the ascent will be very fast until we reach El Serrat some 9.5 kilometres to the finish. That is where the climb really starts.

"The first kilometres might be the hardest, until we'll reach a tunnel with about five kilometres to go. From there, the road is a succession of hairpin curves which are not overly steep but will be hard because of the altitude. The last four kilometres are located above 2.000 metres altitude, and many riders will pay for it. It's a pretty good ascent for a climber," he commented.

The Astana leader initially wanted to ride the Port d'Envalira as well as the Tourmalet that will be tackled in stages eight and nine of this year's Tour, but could not because of bad weather conditions. He might return to the Pyrenees to finish his reconnaissance soon.
Posted by Recovox at 8:15 AM