Basso and Liquigas team cause destruction 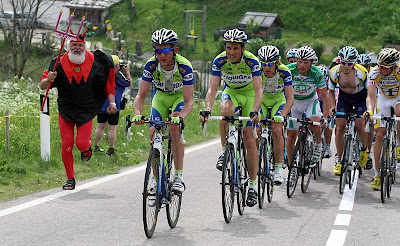 Ivan Basso and his Liquigas team produced some devastating results over the finale of the fifth day of the Giro d'Italia on Wednesday in the Dolomites: Lance Armstrong lost 2:53 to his Italian rival, Damiano Cunego 2:34, Gilberto Simoni lost 42 seconds and Michael Rogers lost 17 seconds.

"Some riders don't handle such short stages well. Honestly, I was worried going into it. After the first pass there was a long descent and immediately the ascent to Siusi," the 2006 Giro d'Italia winner Basso said.

The 24.9-kilometre Alpe di Siusi climb ended a day that started an 8.2-kilometre Passo Rolle. The first climb produced the stage's escape, but the finale on Siusi allowed Liquigas to blow out their rivals.

"You saw in the last four kilometres, I was always puling hard. It is hard to make a big difference on such a short stages, though. It really is a strange Giro, we are in the fifth day and it is difficult to manage such a climb so soon."

Liquigas managed the stage with five men at the start of Siusi. Kjell Carlström and Vladimir Miholjevic drove before handing the pace making over to Sylvester Szmyd and Franco Pellizotti. Szmyd's pull from seven to three kilometres remaining was the most impressive.

"Szmyd and all of the team showed themselves well. Pellizotti, you have to ask him. I think he was going well but lacked a little bit to stay with the first riders."

Basso warned that there are still some dangerous days in this first week– tomorrow and the stage to Bergamo on Saturday – but the next show down will be the Cinque Terre time trial, stage 12. He has previewed the 60.6-kilometre stage more times than his rivals and is well positioned to take the race leader's maglia rosa, his first since 2006.
Posted by Recovox at 7:15 PM