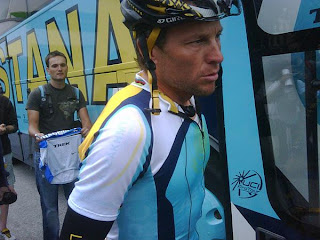 Team Astana debuted a new kit in today's seventh Giro d'Italia stage. The "sun" logo and most of the sponsor names have been dramatically lightened on the jerseys, but the colours have remained the same.

"The sponsors are still there, but much lighter, except for Trek, Nike and KazMunaiGaz, who paid," team spokesman Philippe Maertens told Cyclingnews.

The team has experienced difficulties with payments from its sponsors, and riders and staff are behind in receiving payments. The UCI threatened to suspend the team if payments are not made by May 31.

KazMunaiGaz, which exports petroleum oil, is one of the Kazakhstan state-owned companies which sponsor the team. Trek (bicycle manufacturer) and Nike (casual clothing) are also long-term sponsors. All three have fulfilled their obligations, but companies KEGOC, Eurasian Bank, Kazakhmys, Kaztsink and Kazakhstan Temir Zholy have not.
Posted by Recovox at 8:13 AM