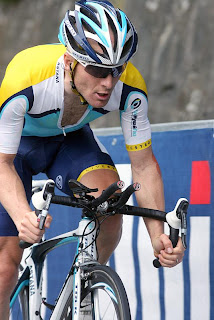 Levi Leipheimer hopes that Monday's Giro d'Italia stage to Monte Petrano holds the key to winning his first Grand Tour. Sitting in third place overall after stage 14, the American rider from Santa Rosa, California, trails in the general classification by just 43 seconds with a little less than half of the three-week race left to complete.

"I think Monte Petrano is the biggest day we have from now until the finish," he said to Cyclingnews. "Obviously, there are two uphill finishes with Blockhaus and Vesuvio, but Petrano is a long day and it is probably going to be hot, some guys can just crack."

Monte Petrano, stage 16, promises to be one of the most testing days of the centennial Giro d'Italia. Four categorised climbs make up the 237 kilometres of the stage through Le Marche region. The fourth and last, Monte Petrano, is a 10.4-kilometre climb up to 1,101 metres.

Leipheimer, third overall in the 2007 Tour de France, has the experience to manage the testing stage as a possible platform to a Grand Tour win. However, two-time Vuelta a España winner Denis Menchov (Rabobank) is leading the race and will be tough to beat. Danilo Di Luca (LPR Brakes-Farnese Vini), the 2007 Giro winner, is in second at 34 seconds.

"I keep saying it, but it is day-by-day and kilometre-by-kilometre. If I feel good I will attack, I promise you that," said Leipheimer.

The attacks may not come, according to Di Luca, who distanced Leipheimer by three seconds Saturday in Bologna. Di Luca, who wore pink earlier in this Giro, said he has never seen Leipheimer go on the offensive in the Giro d'Italia.

"Well, if he is only six seconds ahead of me in Rome, then I won't have to attack," Leipheimer said.

If Leipheimer misses the opportunity to take control on the Monte Petrano stage, then he can look forward to the race's final day. The Giro d'Italia finishes with a 14.4-kilometre time trial in Rome, May 31.
Posted by Recovox at 9:26 PM