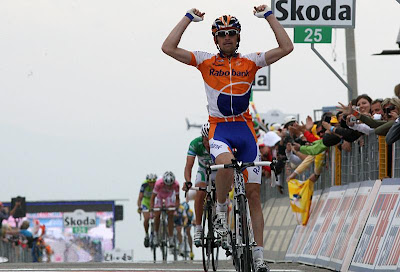 Denis Menchov (Rabobank) put in a powerful surge inside the final kilometer to win stage five at Alpe di Siusi. The Russian emerged from an elite group of seven riders which formed on the upper slopes of the 25-kilometre ascent to the finish. Danilo Di Luca (LPR Brakes-Farnese Vini) finished second at two seconds and overnight race leader Thomas Lövkvist (Team Columbia - Highroad) arrived in third place a further three seconds back.

Time bonuses moved Di Luca into the race lead ahead of Lövkvist.

The Liquigas-led peloton absorbed six survivors of a race-long seven-man break on the final ascent, neutralizing their escape with 10 kilometres remaining until the finish. Liquigas super-domestique Sylvester Szmyd continued to set a punishing tempo for the next several kilometres gapping off one GC contender after another before turning over the reigns to teammate Ivan Basso.

After enjoying a maximum advantage of nearly five minutes, the septet reached the final climb of the day, the 25-kilometre ascent to the finish in Alpe di Siusi, with a three-minute lead. As the GC contenders upped the pace at the head of the peloton the break's lead rapidly diminished.

Francesco Gavazzi (Lampre) was dropped almost immediately on the ascent while his six companions pressed onwards, finally absorbed at the impetus of Liquigas with 10 kilometres to go.