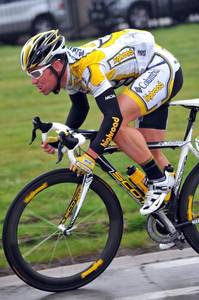 Mark Cavendish was wet and cold after today's 242km Giro d'Italia stage to Chiavenna but like everyone on the Team Columbia bus, he was happy that team mate Edvald Boasson Hagen had won.

Cavendish finished 11th, one place behind fellow Brit Ben Swift (Katusha) and 40 seconds behind Boasson Hagen. After the finish, Cavendish was the first to hug the young Norwegian and seemed almost as happy as if he'd won himself.

“It's brilliant for the team to get another win,” he told us after getting changed into warm clothing.

“Edvald's a great rider and is so versatile, he can do almost everything. He chased for me when I crashed (on the stage to Valdobbiadene), he worked for me in the last kilometre in the sprint (in Trieste) and then he was in the front group in the mountains helping Rogers and Lovkvist. He's a super, super talent. When he really learns how to race well, he'll be unstoppable.”

“I went for it on the descent going through the tunnel. That served as a slingshot for Edvald to get across, so it was perfect,” he said.

“It's not often I get to contribute to someone else's win like that. It's nice. If I can do it, I have to try and pay the lads back for all the work they do for me.”

Cavendish admitted he is feeling tired after seven days of racing but seems to be enjoying the Giro.

“The finale was really cold and very technical. I think you could have taken 200km off the stage and still have had the same outcome,” he said.

“I'm tired but I think most people are tired. It's been a long first week with the Dolomites.”

Saturday's eighth stage includes the Colle del Gallo climb and the short ramp up to Bergamo Alta used in previous edition of the Tour of Lombardy.

It could also suit Boasson Hagen, while Cavendish and Team Columbia have their eye on Sunday's criterium stage in the centre of Milan.
Posted by Recovox at 11:56 AM