Petacchi takes two in a row 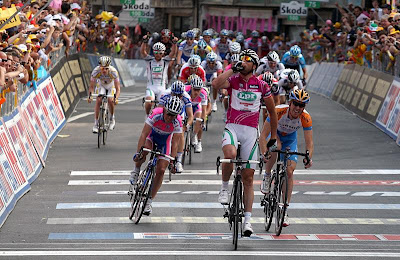 "I pulled off a number today," said Petacchi. "I went truly strong on the climbs and had good sensations. I stuck with the front runners and took a great sprint over Farrar. Above all, I am happy because after those climbs it was not easy.

"This maglia rosa is the result of a great team and a great Petacchi." Farrar took the maglia bianca of best young rider.

A crash split the peloton with about 10 kilometres to go. The crash was near the front of the peloton, catching many riders behind them and knocking them out of competition for the finish – including Mark Cavendish in the pink jersey.

The day was animated by an escape of five, which got away after only nine kilometres. Giuseppe Palumbo (Acqua e Sapone), Yuriy Krivtsov (AG2R), Mauro Facci (Quick Step), Mikhail Ignatiev (Katusha) and Björn Schröder (Milram) quickly built up a lead of seven minutes. Their lead held for most of the day, but they the peloton caught them at kilometre 161.

Team Garmin-Slipstream suffered a major blow when captain Christian Vande Velde crashed about three-quarters of the way through the stage. He tried to keep on going, but soon had to leave for hospital in an ambulance.
Posted by Recovox at 9:05 AM