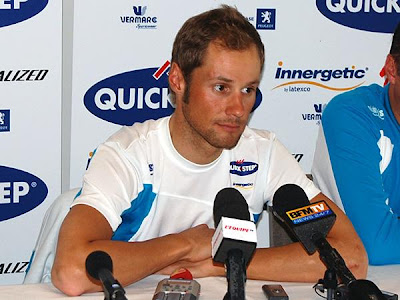 Tom Boonen says he may have used cocaine on an afternoon when he had too much to drink. However, he claims to have had a black-out and does not know what happened.

"I do not think I have a problem with cocaine, I have problems when I drink too much. 364 days per year I am good. But if I drink too much, it's exactly like I change in my head," Boonen told Belgian Radio1.

The Quick Step sprinter was suspended by his team Saturday after it was announced that he had tested positive a second time for cocaine.

"I need help," he told sporza.be. "Someone should teach me to understand what happens when I drink too much."

Looking to the future, he said, "Whether I will continue to be a cyclist? That is the least of my concerns."

The former World Champion received support from Lance Armstrong. According to nieuwsblad.be, the American said, "Tom must look at himself and and say, 'I have a problem, how do I solve this?' He is not the only one in the world who has to resist temptation. I wish him the best and hope everything goes well.."
Posted by Recovox at 9:01 PM