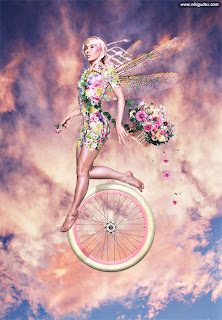 Niki Gudex is one of Australia's most talented female athletes. As a professional downhill and cross country mountainbiker, Niki has represented Australia in the World Championships on several occasions; she's even found the time to become a bit of a role model for those just getting into the sport. Yep, Niki is one model mountainbiker...

When did you first discover that you were into downhill mountain-biking?

It came about through snowboarding. About 10 years ago when the snow season was coming to an end, I went on a bike adventure by myself through the bush out the back of Jindabyne (NSW). I had no biking fitness and I became lost, but despite all that I subsequently got myself hooked on it. A few weeks later I was living back in Sydney and I started going to bike races, because I didn’t know anyone that rode bikes and I didn’t know of any trails to ride. I fell in love with downhill mountain biking as soon as I tried it, which was my very first race.

Was it something that you had a natural flair for?

Yes, it immediately felt really natural to me. I have always been adventurous and a tomboy when it comes to sport, so I wasn’t afraid to give it everything. My background in snowboarding helped because I had already trained myself to look for lines and to find a rhythm and natural flow to the terrain.

What sort of training did you do in order to become top of your field?

For downhill I just went to races and raced. About a year after I started I qualified for the Australian World’s team, so then I began doing more riding away from the races to get some fitness. Then later on I became interested in doing both downhill and cross country mountain biking and then I absolutely trained my ass off. I did a lot of gym work with weights and spent thousands of hours of riding, on the road on the mountain, as well as lots of swimming and yoga. Mountain biking does require a lot of fitness and commitment, but really it comes down to a lot of riding. 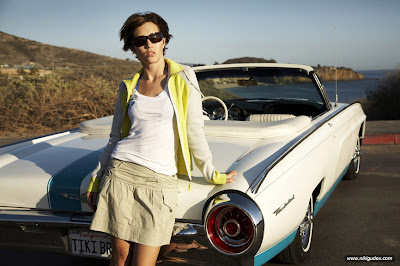 What would you regard as a career highlight?

Being able to represent Australia for both downhill and cross country over the years has definitely been a highlight. The atmosphere at the mountain bike Worlds is always buzzing and it’s a great time to catch up with all of my mountain bike friends from around the world in one place.

You are also a model and a spokesperson for the industry; is this something that’s always interested you?

I have always been interested in promoting mountain biking and cycling because it is a great sport, a fantastic form of transport and a fun hobby for those who aren’t interested in racing, so it caters for everyone. I’m passionate about cycling and I always will be. Being a spokesperson for the sport came about because I was out there at the races, giving everything I had in each race and working really hard for something I believed in. I still love racing and riding super technical trails. Combining my riding with modeling and being a spokesperson has allowed me to reach out to more people and hopefully inspire other people to pursue their dreams.

Have you found it tough being a female athlete in such a male oriented sport?

It can be really tough because the guys can hang out and ride together and girls can too, but it is never truly the same. I love riding with other girls but we all live so far away that it doesn’t happen unless we are on a road trip or at an event somewhere.

Do you have any advice for people trying to break into mountain biking professionally?

Keep focused and work hard. Remember to keep it fun because life is short and the body we have now is ours for life. It’s better to give an injury some time to heal because otherwise it will show up again somehow. Listen to your body - knowing when to push past the pain is great but if you have a high pain threshold then sometimes you can do more damage than good.

Finally, we’re an extreme sports magazine; what’s the most extreme thing about you? 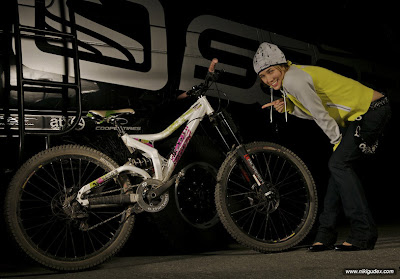