Armstrong after Giro stage 5: 'That was hard' 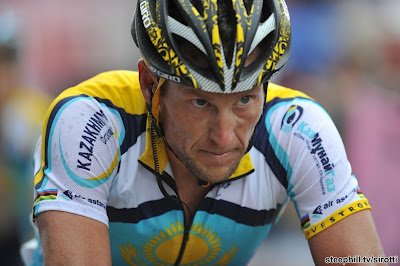 Yet again Armstrong went deep to try and stay with the overall contenders, showing his so-called 'dead Elvis' face of pain.

He was dropped six kilometres from the finish and finished with Astana team-mates Janez Brajkovic and trusted domestique Chechu Rubiera.

After getting dressed and taking a drink, Armstrong admitted that he had underestimated the time he would lose, but insisted he was satisfied and still enjoying himself despite the pain and suffering.

“I'm definitely a little tired, it was a hard climb,” he said.

“I knew that we'd be behind so we just had to ride at our tempo and limit the losses. I thought maybe two minutes and it's closer to three, but that's okay.”

“I'm pleased with where we are. If I could have woken up this morning, snapped my finger and ridden away from everybody, I would have done that. I'd like that but it's not realistic in 2009 and it wasn't realistic in 2001 either.”

“As I said at the beginning of the race, the first half of the Giro is not going to be my half. I've got to ride into the race and still get my condition back after the accident. I can't expect to be at the front.”

“I didn't come in with any big illusions. I knew that I'd be minutes behind the best guys. The key is to ride within your limits, so you that when you get dropped you find your threshold and hold it there. We'll see what happens in the second half of the Giro.”

NEVER STRONG IN MAY
Armstrong tried to justify his performance by saying he was never on form in May, even when he won the Tour de France.

“It felt like a climb in May. In all the years in the past, I'd never have done climbs like this in May,” he said.

“At this time of year I'd be doing training camps and then at the end of May I'd do the Midi-Libre and then the Dauphine in June. Even when I won the Tour de France I wasn't the best guy on the team at the Dauphine. My build up is always a little more steady and mercurial, so I can't expect that May would ever feel any different, especially after the crash.”

Is there more to come in July?

Do you still manage to enjoy, despite the suffering?

“Yeah. As long I stay with Chechu, I enjoy it. I don't have a problem with people riding away from me. I knew it was going to happen. I just look around, find my guys and ride my tempo.”

Armstrong slipped to 22nd overall at 3-34 and is no longer considered a contender. However he said the Italians and other contenders should be worried about team mate Levi Leipheimer.

“I think Levi is one of the real favourites. If I were one of the Italian guys, I wouldn't sleep well the night before Cinque Terre…”
Posted by Recovox at 12:48 PM