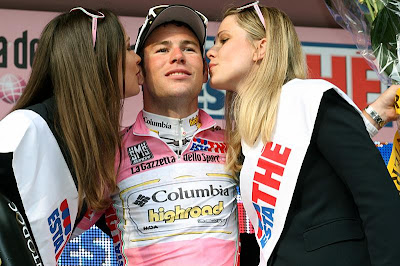 Team Columbia-Highroad was the fastest squad in the Centennial Giro d'Italia's first stage, a team time trial over 20.5 kilometres in Venice. The American outfit, which saw Mark Cavendish as first rider over the line, outsprinted Garmin-Slipstream by six seconds, with Lance Armstrong's Astana team coming in third.

Manxman Cavendish will thus wear the first maglia rosa of the 2009 Giro d'Italia. Jonathan Vaughters' team lost out on the hoped-for victory by only a few seconds and this might leave a sour aftertaste for the team which had especially targeted the Giro's opening stage, especially after Cavendish's remarks made yesterday.

Third-placed Astana again displayed its time trialling abilities, with Danilo Di Luca's LPR squad showing a solid performance in fourth. However, no big time gaps were made on the pancake-flat course along Venice's Lido beach.
Posted by Recovox at 10:59 AM