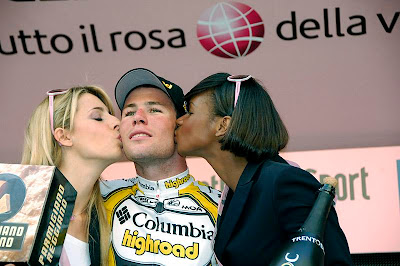 Mark Cavendish was especially proud to complete the Team Columbia Giro d'Italia stage win hat-trick in Milan today and could not praise his team mates enough after blasting down the Corso Venezia to victory.

Cavendish was angry with himself after losing to Alessandro Petacchi in Trieste last Sunday and so there was no way he was going to lose again, even if he is not at his very best.

“I love to win. It's an addiction to me,” Cavendish said.

“I'm usually set up to win and I can't hide that I had perfect opportunity in second stage but didn't deliver. I was more motivated today and my team delivered me perfectly and I rode it perfectly and went full gas. There was never a chance I was going to be beaten because I was so motivated after the last time.”

Cavendish had no time for anyone who is getting tired or envious of Team Columbia's success in the Giro.

“Things couldn't have gone any better for us. We won the team time trial. Tommy didn't win the mountain stage but we got the maglia Rosa back. Then we won the last three stages: Edvald won from a small breakaway, then Konsta won with a long break, then today I won the bunch sprint. It's not that diverse riders won but that the team adapts to every different situation.”

“It was Edvald's birthday today and a national holiday day in Norway. He was wearing the ciclamino (points) jersey but he still did the last kilometre for me. That's not only shows special talent but shows a special mentality. I'm so proud to be part of that and that what makes us win so often.”

“I'm not in the shape at Milan-San Remo but I'm in better overall condition than last year. I'm lucky that my team put their faith in me, put in the best position, keep me sheltered and deliver me. I'm actually feeling better each day and so hopefully my form is getting better too.”

After winning Milan-San Remo Cavendish had some choice words for Tom Boonen. After his win in Milan he responded to Australia's CJ Sutton (Garmin rider and nephew of British coach Shane Sutton).

It was the question “Have you worked out how to beat Petacchi” that stuck in Cav's throat.

“I don't understand the question? He's beaten me only once, the other day (in Trieste), while I won Milan-San Remo and beat him at Tirreno-Adriatico. Today I was just putting right what I messed up the other day.”

“CJ Sutton is the only rider who said he knew how to beat me and so I want to dedicate this win to him. Maybe he should talk to Petacchi? I'm glad he's not telling anybody otherwise I wouldn't have won…” Ouch.

CAV ON THE RIDER'S PROTEST

Cavendish's victory will probably receive less attention than it deserves because of the protests by the peloton during the stage.

He was part of the riders who were happy to race on the circuit but pointed out the decision to neutralise the stage meant that nobody had to take unnecessary risks if they did not want to.

“There was a race to ride and a lot of spectators out to see us race a beautiful stage. It was a special stage, called Milan Show and it was a special stage for me. Some riders didn't want to race today but a lot did. I think it worked out right. The people who wanted to race could race and those who didn't want to didn't have to. I hope the spectators got a good show. I'm just happy I won.”
Posted by Recovox at 7:18 PM