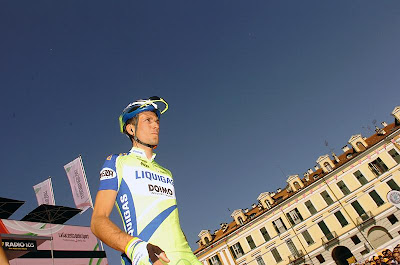 Liquigas-Doimo's Ivan Basso believes he can still win the Giro d'Italia despite loosing more time to Danilo Di Luca (LPR Brakes-Farnese Vini) on Tuesday's mountain stage to Pinerolo. The 2006 winner, who is 2:03 minutes behind his compatriot, wants to take the race lead in the final mountain stages.

"We have faith going into the last stages, where I will try to attack on the mountaintop arrivals," Basso said.

Basso lost ground to a group with Di Luca, Denis Menchov (Rabobank) and Carlos Sastre (Cervélo TestTeam) on the descent of Pramartino, 10.5 kilometres from the finish. He finished 29 seconds behind Di Luca in a group that included overall contenders Levi Leipheimer (Astana) and Michael Rogers (Columbia-Highroad).

"It was very a very technical descent," said Basso. "It is difficult for me to stay with the front runners on that type of descent."

Basso did stay with the front-runners over the race's highest climb, Sestrière (2035m). Team-mate Sylvester Szmyd worked to thin out the competition in the group and prepare for the attack of Franco Pellizotti on the short Pramartino climb.

"We tried to make something happen on the last climb," he said. "It is too bad Franco did not win the stage, but Di Luca just showed he is better. It was a stage adapted to him and Di Luca, with a climb that is relatively short."

Basso showed he has the strength for the climbs in the final week of racing, providing he avoids major time losses in Thursday's 60.6-kilometre time trial in Liguria's Cinque Terre. He will have to limit losses to specialists Menchov, Leipheimer and Rogers, but his familiarity with the technical nature of the stage should help him eat into Di Luca's lead.

"It is clear that the Giro is becoming a race where Danilo has to defend himself and we have to attack," he said.

Basso hopes to attack and gain most of his time advantages in the final week, when the race travels into southern Italy. His best chances to gain time are on the stages to Monte Petrano, Blockhaus and Vesuvio.
Posted by Recovox at 7:27 PM