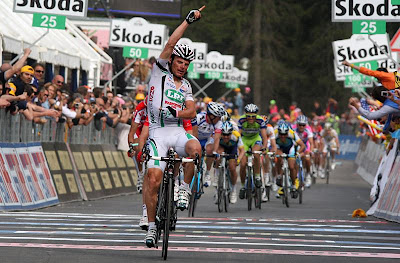 It might not have been a slaughter, but Danilo Di Luca stuck his knife in the Giro d'Italia's first mountain top finish and came out with the sweet meat - his first stage win in his home tour in two years. The LPR Brakes rider was challenged by Stefano Garzelli (Acqua e Sapone) and Franco Pellizotti (Liquigas), but showed why he is nicknamed "the killer" with a violent acceleration to the line which none could match.

Barloworld's Mauricio Soler snuck in for fourth after a failed last kilometre attack. He was followed across the line by Gilberto Simoni, Levi Leipheimer, and the race's new maglia rosa, Thomas Lövkvist (Team Columbia - Highroad).

The stage played out as many could have predicted, with even perennial escape artist Jens Voigt (Saxo Bank) being present in the day's long breakaway which escaped at kilometre 5.

The first difficulty of the day, the Croce d'Aune, saw the demise of first Stannard, then Vigano, and finally Martinez, while the remaining three went on to contest the final climb to San Martino di Castrozza. Voigt, as expected, was the last man standing when the peloton finally closed down the last of the gap with 2.5km to go.

Soler put in his move inside 2km to go, and the peloton was slow to react. He built up a lead of a few hundred metres, but lost it just metres before the line.

As expected, Alessandro Petacchi lost the pink jersey, but before he dropped to the gruppetto, he put in some hard work at the front on the base of the Croce d'Aune for Di Luca, doing both justice to the jersey and valuable assistance to his team leader.
Posted by Recovox at 10:21 AM