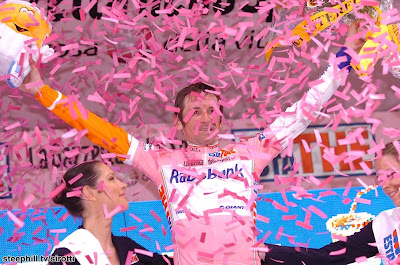 Denis Menchov proved that he came to win the Giro d'Italia Thursday with a dominant ride in stage 12's time trial through Cinque Terre. The Russian won the day with 20 seconds on Levi Leipheimer and took the leader's maglia rosa from Danilo Di Luca, but still has a fight ahead of him with nine days of racing and several challenging mountain stages in Italy's south.

"It is like all Grand Tours with its dangerous mountain stages. The stages like Petrano, Blockhaus and Vesuvio are the most important stages, and let's not forget the days to Bologna and Faeza," Menchov told Cyclingnews after the stage.

Those mountain days may not be so difficult for team Rabobank's Menchov based on how he handled the technical 60.6-kilometre time trial, which contained climbs up Passo del Bracco and Passo del Termine. Menchov was the fastest up both climbs and won the stage by 20 seconds over Leipheimer (Astana) and 1:54 over previous race leader Di Luca (LPR Brakes).

"I thought more or less that the fight would be like this, Danilo [Di Luca] showed that he had great condition and I knew it would be a fight of seconds. If I had to pick one name as the potential Giro winner I would say Di Luca because he is showing to be very motivated and has the grit," he told gathered press.

Menchov, 31, looks prepared to add an Italian Grand Tour to his two Vuelta a España titles. His team, though suffering from the dramatic loss of Pedro Horrillo on Saturday, can rely on its climbers Laurens Ten Dam and Mauricio Ardila Cano.

"I think that we are more or less the level of Liquigas or LPR, we have a good team. Every year I have more and more experience and I know how to better manage races."

Menchov dedicated his win to Horrillo, who is still recovering in a Bergamo hospital following his fall from Culmine di San Pietro. "I hope to speak with him in the next few days."
Posted by Recovox at 4:49 PM