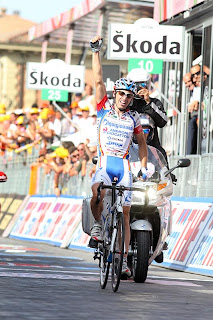 Leonardo Bertagnolli (Serramenti PVC Diquigiovanni-Androni Giocattoli) won a hot and hilly stage 15 of the Giro d'Italia. On the way to his first Giro d'Italia stage win, Bertagnolli was part of the main break of the day along with 15 other riders. As the peloton negotiated four categorized climbs, the lead group splintered and riders took turns dropping off.

By the final kilometers of the race, it was just Bertagnolli and Serge Pauwels (Cervelo Test Team), but Pauwels sat up, seemingly under team orders, leaving Bertagnolli on his own for the duration of the race. Bertagnolli's perseverance paid off in the form of a stage victory on the streets of Faenza.

The day's action started with an early break by Jens Voigt (Saxo Bank) and Dries Devenyns (Quick Step), but they were caught at 15km.

The next significant break was the one with 16 riders which had just about every squad represented except the Rabobank team of the maglia rosa, Denis Menchov.

Of these riders, Serpa was the highest placed, just 9:52 down on Menchov in the GC going into the stage. Grivko was clearly in the mix for the mountains jersey - challenging Stefano Garzelli (Acqua & Sapone).

The break got up to five and a half minutes on the maglia rosa chase group. In that group, Ivan Basso (Liquigas) went on the attack on the day's penultimate climb, the seemingly innocuous category three Monte Casale. He took Stefano Garzelli (Acqua & Sapone) with him and the two went on a quest to catch what was left of the break.

Basso's gamble failed to pay off, and on the final climb, the category 2 Monte Trebbio, they were caught by the the maglia rosa group. Danilo Di Luca tried one significant attack on a climb, but Menchov and the others responded immediately and the group was soon neatly back together.

Up ahead, Bertagnolli was chased by four riders who came together in his wake: Pauwels, Pinotti, and Bak. The four riders failed to cooperate, leaving the Italian alone to take his first Grand Tour stage. Pauwels took the sprint for second, Pinotti third. Bak and Marzano rounded out the top five.

There were no major changes at the top of the GC. Menchov retained his lead in the overall classification and will wear pink for another day in the mountains tomorrow. Gilberto Simoni (Serramenti PVC Diquigiovanni-Androni Giocattoli), who was eighth, dropped out of the top 10.

Two riders did not start the day, including Eros Capecchi (Fuji-Servetto) and Tyler Farrar (Garmin - Slipstream). Others, like Ricardo Serrano (Fuji-Servetto), David Millar (Garmin-Slipstream), abandoned during the tough stage.