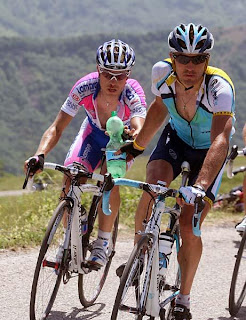 Yaroslav Popovych took the hardest day at the Giro d'Italia head on with an attack only two kilometres into the 235-kilometre stage on Monday.

"I went clear for the team and then I just took the situation as it came to me."

Popovych broke away with 19 others, forming a well-balanced lead group. They battled over the race's climbs, but prior to the fourth and final climb of Monte Petrano the Ukrainian was on his own.

"There were a lot of guys just trying to save their legs in the escape. I am not stupid, I saw many riders who joined the escape and then pulled very little. When we took seven-plus minutes and we had a good rhythm, but they helped only a little bit."

Damiano Cunego (Lampre) and Gabriele Bosisio (LPR) were the last to stay with Popovych, who was trying for a stage win and staying up the road in case team captain Levi Leipheimer needed him in a crucial moment. Cunego was fighting for a stage win to salvage his Giro d'Italia and Bosisio was seemingly playing dead for classification favourite and teammate Danilo Di Luca.

"The strongest were Cunego and I but not Bosisio. Let's not kid ourselves! Bosisio stayed on our wheels all the day and did not pull one metre," said Popovych, who stayed on his own until 2.5 kilometres remaining of the 10.4-kilometre climb. Carlos Sastre (Cervélo) then passed him and went on to win the stage. The Astana rider eventually drifted further back, passed by teammates Leipheimer and Lance Armstrong, to finish 18th.

Popovych joined team Astana this year to ride at the side of Armstrong and under the guidance of Johan Bruyneel. He raced the 2008 season with Silence-Lotto.
Posted by Recovox at 10:35 AM