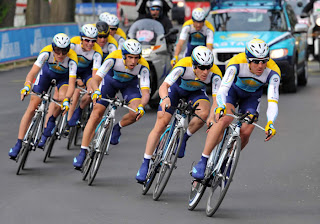 It's finally here! Since January's training camp I have been looking forward to racing the Tour of Italy. This will be the first Giro of my career, which is enough to get me really excited, but on top of that we have a team that can win the overall and 7 time tour de France champion Lance Armstrong along to add even more enthusiasm and excitement.

I have done just about every major race in Europe and in the states throughout my career, so getting the opportunity to do a race for the first time is rare these days, and has really helped to give me a huge boost in motivation. Up to now, my season has gone pretty well so far even with all the set backs due to injuries. And although this isn't the Tour de France, the Giro is still a huge and important race, and a good ride here could certainly make my season regardless of what happens after. Needless to say, I'm happy to be here and more than ready to get going!

This morning when I woke up I was excited to finally get the race going. The last week has been spent hanging out at the hotel training, resting, and sleeping.

The grand tours are a little different than any other stage race because you have to arrive the Wednesday before the race starts. Since we came straight from the end of the Tour of the Gila, Levi and I have been here since Monday. With all of that time to wait, it has seemed like a VERY long week!

The last week is also when many things can go wrong with your fitness. Too much rest or to much eating can result in arriving at the first stage overweight and/or undered trained, which could undo months of work. Normally, it would not be too much of a problem, since we usually have a week of flat stages before hitting the start of the mountains. But this year's Giro has turned things upside down, with the first of the mountain stages coming on stages 4 and 5. Also just as bad could be arriving over trained and too tired to recover from each of the stages. So arriving at the first stage with 100% form this year is very important and is a tricky balance to maintain. But I was really careful this week, and I feel like I've done things right, and seem to be arriving with great form, good weight, and lots of motivation!

Today we arrived at the start of the first stage, the TTT, 4.5 hours early. After getting back in our bus we had time to have lunch (rice and omelette) and then ride the course for the first time. We did two passes on the course together to get an idea of what we were facing.

Right away we realized how dangerous the course could be when one of the motorcycle photographers was going head on into another team while trying to take pictures of ours from the side. To avoid hitting the other team he changed into our lane almost taking me out with his motorcycle. The rest of the team behind me had to avoid the cones flying in every direction. That got our heart rates going!

After seeing the course it was back to the bus. The next few hours were spent trying not to get too nervous. This is the hardest part of the whole race. With the bathroom being in non-stop use its obvious to see that even for the professionals at this level, being nervous before the start of a big race is something that no one ever gets used to.
The team warmed up once more all together 30 to 50 min before our start time, and then it was time to go to the start of the TTT. In these events, controlled chaos is the best that any team can hope for, and total chaos is what most the teams will get. The differences in the strength of each rider in team will start to show up very quickly.

The director had decided that I would start the team off followed by Lance, Steve, Ziets, Chue, Popo, Levi, Danny, and Jani in that order. How we would finish could potentially be another story.

With me starting, my bad shoulder would help to keep me slowed down a bit out of the gate, which would keep the first acceleration from being too aggressive - and keep me from flying straight out the back of the group after the first pull (which is always a risk if you get too excited and blow yourself up in the first pull).

As soon as we started I brought the team up to 57KPH. Lance took over and the speed went up to 65kph. From there the team jumped straight into a good rhythm, with each rider pulling as smoth as glass.

I was waiting for it, but the chaos never arrived. It was the first time in all my years as professional doing TTT that I have seen a team ride so smoothly. We finished well, taking 3rd on the stage - only a few seconds off the winning time. The team rode a perfect race and it was a great confidence boost going into the start of a great race.

Going to the next stages now the team should be able to relax and save some energy for what should be an epic battle to follow. The route looks unbelievable, and with this being the 100th Giro, it is going to be an amazing race be a part of!
Posted by Recovox at 11:18 AM