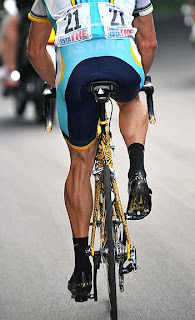 The cheers that went up in the press room when Lance Armstrong attacked on Wednesday's stage told us several things - the American is much loved by the media, his short burst of energy at Blockhaus helped liven up a somewhat dull Giro, and there's is just a hint, or maybe a hope, that Lance will repeat his attack in tomorrow's climb to Mount Vesuvius.

To make suggestions of Lance taking a stage-win would have seemed stupid even a few days ago, yet such is the magnetism of this exceptional athlete that people in the Giro are openly talking of this prospect - yet it is of course, a near-impossibility given the knife-edge situation affecting the overall leadership.

The incredible thing is, Lance has only to make a move, a surge, or even a playful acceleration to get everyone up on their feet and staring at the TV screens. One thing is for sure, Lance is coming into form at just the right time, and he'll leave this Giro with a full three weeks' racing in his legs which in turn will set him up for a month-long training regime at altitude when he gets back to the 'states.

With Levi Leipheimer out of contention now, Lance is free to race the race the way he wants to, and that has given Astana something to look forward to, a thing to focus on in the days that remain. I'm sure Lance wants to leave Italy knowing he has managed to give the adoring tifosi something to remember him by, and if he doesn't actually manage a top performance on Friday, then maybe it will come instead in the showcase time trial on Sunday.
Posted by Recovox at 11:03 AM