How Are The Giro Favorites Doing? 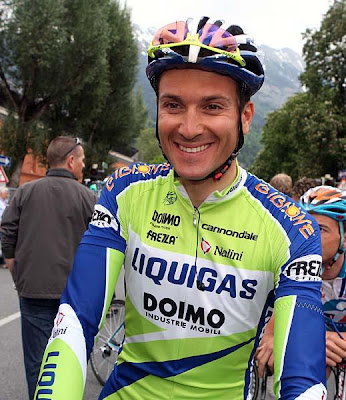 As the race reaches it's first brief pause before Tuesday's monster stage to Pinerolo, we take a look at how they've been getting on.

1 Ivan Basso
6th at 1-14
Still looks to be the favourite for the race, and judging by the amount of work his Liquigas team has done on the climbs, they do too. Tuesday's mountain stage and Thursday's time trial will tell us whether he's good enough to beat Di Luca and Leipheimer.

2 Damiano Cunego
21st at 3-37
Our single biggest mistake was believing that Cunego could challenge. What were we thinking? He simply isn't a grand tour rider, and that's absolutely fine. He's even come to terms with it himself.

3 Levi Leipheimer
4th at 51 seconds
On his Twitter feed Lance Armstrong took exception to our suggestion that Leipheimer may struggle with the Italian climbs. The thing was, that we were basing our prediction on a thing called 'evidence'. Last year, Leipheimer lost bags of time on every mountain stage. And in the past he's been a lot more comfortable on the steadier mountains, rather than the irregular gradients more common in Italy. But it's typical of Armstrong to use one new fact to disprove a host of older, less convenient ones. So far, Leipheimer's not been put outside his comfort zone on the climbs. Let's see how he copes tomorrow, but our prediction still stands – podium potential, but not the winner.

4 Denis Menchov
5th at 58 seconds
Won the stage at Alpe di Siusi, causing us to revise our prediction upwards. Looks like podium material so far, even if he is prone to losing little bits of time here, there and everywhere when you least expect it – usually when he's caught behind a crash, or falls asleep on a descent.

5 Marzio Bruseghin
20th at 3-24
Looks every bit his age so far. Perhaps he'll make up ground in Thursday's big time trial, but he's not going to crack the top five. Might trouble the top 10 if he's very lucky.

6 Franco Pellizotti
9th at 1-35
Had a bit of a wobble in the Dolomites, but looks like he'll be top ten at the end of the race.

7 David Arroyo
10th at 1-49
Needs to gain more time in the mountains to make up for his shortcomings in the time trials, so seventh may have been a bit too enthusiastic a prediction.

8 Michele Scarponi
33rd at 5-31
But for the 4-46 he lost at Alpe di Siusi, he'd be right up there among the leaders. Having said that, he'd also be minus one stage win, as he'd never have been allowed freedom. Isn't going to make the top 10 now.

9 Tadej Valjavec
13th at 2-44
Lurking just outside the top 10. If he keeps going well, and one or two others fade away, he could make it.

10 Kanstantsin Siutsou
16th at 3-02
Won a stage, rose to 16th place and is riding well, but we're kicking ourselves for overlooking Columbia's other two men, Thomas Lovkvist and Michael Rogers.

Thomas Lovkvist and Michael Rogers – 2nd and 3rd overall
Whoops. Columbia has been the team of the race. And they could make the podium too.

Carlos Sastre – 7th overall
It's obvious now that Sastre wants to do well here, rather than just use it as preparation for the Tour de France. Now he's in the top 10 it's difficult to see him just fading away. It'll take a shocker of a day for him to drop down, and we can't see that happening either.
Posted by Recovox at 9:53 AM