The art of losing, by Mark Cavendish 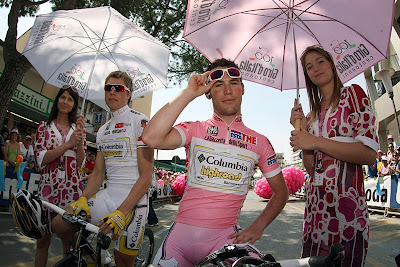 So Mark Cavendish doesn't like losing. Who'd have guessed it, eh? Er, anyone who's seen the same dark expression and pursed lips which Cavendish wore this evening in Trieste before – on one of the other rare occasions that the Manxman has lost a sprint over the past eighteen months.

"I just love seeing this," chortled Columbia-Highroad chief Bob Stapleton as he sat at the back of Cavendish's press conference, watching his prodigy seethe. "This is why he's so special: he hates losing so much."

Stapleton then issued a warning inaudible to the three dozen or so reporters hanging on Cavendish's every, self-loathing monosyllable. "There are climbs near the finish tomorrow, but have many times does he lose twice back to back? You can bet your life that he'll do everything to be there tomorrow."

Cavendish's verdict was that he'd been "lazy". "Complacent". Two adjectives that the Manxman can't abide. Call him a "dickhead" as Cavendish himself did in reference to his furious rant at Marco Pinotti as they crossed the line yesterday (Pinotti: "I just didn't risk enough on the last corner...and Mark's reaction was just due to the tension of the race") but don't ever suggest that he's a slacker. Ever. Only Cavendish is allowed to beat himself with that stick.

From where I was watching (on the TV screen in the pressroom), it looked as though Columbia suffered from the lack of a rival sprint train. Edvald Boasson Hagen led into the final kilometre but was flagging by the time that Mark Renshaw took over in the last 700 metres. Usually, another team would have given Cavendish a target and a wheel as that deceleration took place – but today, by accident or design, there was no-one. Filippo Pozzato told me recently that he thinks Cavendish is at his most dangerous when the speed drops for a split second in the final kilometre. That's exactly what happened today and it seemed to do Cav no favours at all.
Posted by Recovox at 10:18 PM